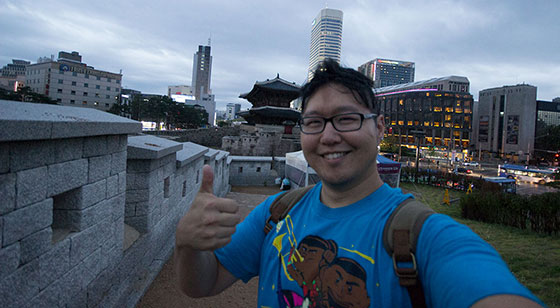 Obviously, being American-born, there’s a ceiling of just “how Korean” I feel like I can declare myself.  I don’t know more than a few passing slices of actual Korean history, I don’t have tremendous knowledge of my personal bloodline’s lineage and journey of how things have come to be, and my capabilities with the language are pretty elementary in the aggregate; I feel fairly confident in my speaking abilities to have navigated throughout the country with relative ease, but ask me to write anything from a written note to text messages to my own parents, and it’s like a 4-year old trying to write High Valyrian.

But over the last few months, I’ve been reading some young adult stories to my daughters, because I’m of the belief that even if they don’t understand the words that are being read to them, hearing them helps with absorption and future comprehension of the English language.  And the thing is, the authors that I’ve been reading lately, have been of varying Korean descent, and their stories have been featuring Korean characters and telling relatively Korean-in-America types of stories.

One of the common tropes I’ve observed from the youth generation of Koreans in America characters, don’t speak Korean.  Sure, they know choice words that they hear from their parents, but in the grand spectrum of things, these characters are about as American as Wal-Mart and Panda Express.  I find that to be kind of tragic, and rather depressing to my soul, because these characters’ parents are all basically like my own, where they know very little English, but with them knowing NO Korean, they clearly have way more communicative obstacles than I have ever experienced in my life.

Additionally, when I went back up to Northern Virginia to have #2’s first birthday party, it was effectively a large famiry and famiry friends reunion on the side.  Among the famiry friends that were present were the parents of my childhood best friend, as well as several of my parents’ friends from my hometown.  Knowing the mixed audience, when I welcomed everyone to my daughter’s party, I did so in both English, and the best rendition of Korean as I could, because in my head, it would be disrespectful if I didn’t even try, because I did know some Korean.

When I went to do the rounds at each table, the family friends from my old hometown all marveled at the fact that I spoke Korean to the room; to me it was really no big deal, and honestly I appreciate having the opportunity to actually use the language, because I never want to forgive it.  But the kicker was that my old best friend’s parents told me that their three sons, two of whom went to the same Korean language school I did from ages 6-8, have basically forgotten all Korean, and don’t speak it at all.

Again, when I thought about the conversation, the whole thought made me feel really sad.  Sure, I would venture to say that they speak way better English than my parents do, but on the same token, they’re put in a situation where they can’t use their native tongue with their own children.  Yes, I have my own communication issues with my parents due to the language barrier, but at least they can say whatever they want to get off their chest, even if I don’t understand every word of it.

The thing is, this hasn’t been an uncommon story in my life.  Whenever I come across random Koreans in my everyday life, most of whom are usually workers in some sort of service industry, I still like to utilize my own Korean with them, because I figure it would help expedite service.  And so often times, I’m met with some degree of marveling at the fact that I’m an American-born Korean who actually speaks Korean, as rudimentary as might seem.  And I’m often told that their own kids don’t speak any Korean, and I kind of frown and explain that such is unfortunate.

I like to think that encounters with me, cause some parents to get mad at their own kids for not learning Korean.  Like they go home and give some not-so-passive-aggressive remark about how they met a second-gen Korean-American guy who spoke serviceable Korean, and give them the pregnant pause of death to let them know that they’re disappointed in them.

Without question, I want my daughters to pick up some Korean.  Mythical wife and I already discussed that it will be mandatory for our daughters to learn a second language, because the world is way too small to handicap ourselves to knowing just English.  Obviously, Korean is the first preference, so they can communicate with their grandparents, but honestly I’ll accept any other language, as long as they learn it.  Very few of the next generation of children in my family really speaks any Korean, save for maybe 1-2 of them, and again, that’s sad to me.

Last Thanksgiving, I had a cousin of mine ask me to speak to his eldest son, to try to sell learning Korean to him.  I’m the youngest cousin of the generation, and his son was one of the eldest of the next, so I think he was hoping I’d be able to get through to him, so I explained to him how much I hated Korean school and the sacrifice of every Saturday for years, but when I visited Korea and went off on my own, I realized just how confident and capable I felt, because of my ability with the language at all.  I was met with eye rolls and a rebuttal that my example was such and isolated scenario, that it didn’t seem like a hard enough sell for him.  I left it with that I thought a Korean that didn’t know Korean was kind of tragic, and let him go do his thing.

The bottom line is that no matter how inadequate I might feel as a Korean, there are constantly plenty of reasons that come to light how apparently I’m more Korean than so many other Korean-Americans out there.  I don’t want to let it get to my head, but whenever the realization sinks in, I am proud of it.