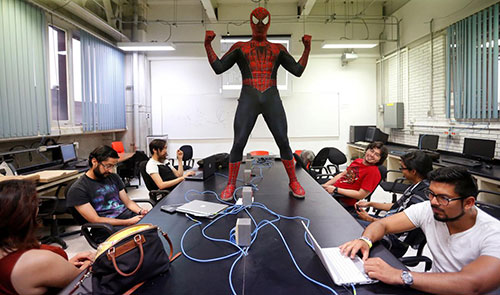 Love this so much: Mexico City science teaching assistant discovers ways to engage students’ attention – by dressing up as Spider-Man.

This right here, is some absolutely amazing (no pun intended) ingenuity and outside-the-box thinking.  Students of today ADHD and Ritalin generation have no attention spans, and need shiny objects and fluffy curriculum to hold their hands into growth.  They’re also being raised to believe that the only acceptable movies out there are all based on comic books.  What better way to kill two birds with one stone than teaching dressed as a comic book character?

This guy, Moises Vazquez, hits the nail on the head on so many levels that absolutely love it.

If I had teachers that dressed up in anything outside of business casual in the first place, I’d have taken notice.  Peter Parker was a huge egghead nerd student to begin with, so what better comic book character to embody, to possibly inspire children with?  And on top of everything else, the guy is actually in decent enough physical shape to actually resemble Spider-Man; or El Hombre Araña as I so remember seeing while in Mexico.

Man, these students probably don’t know how lucky they are to have a guy help teach class like this.  If I were a student, I’d be so jealous right now that they get fucking Spider-Man, while I got the lady that was trying to make a buck off her students by trying to convince us that her 3.5” disks were the only ones “compatible” with the machines were taught on, and sold them for five bucks a pop.   Hell, I’m jealous now, and I’m not even taking any sort of classes, I’d love to be taught shit by Spider-Man.

Seriously, one of the reasons why I didn’t become a bigger, more profitable nerd was the fact that I dropped Computer Science in high school, because of a shitty teacher.  If I had grasped coding to an actual functional career competency, on top of my graphic design development, I’d probably be making some huge money today.  If only I had Spider-Man teaching my class instead of the dumb broad I had…

Anyway, I hope that this guy breaks down some serious walls when it comes to teaching.  This is the kind of ingenuity that should be praised and emulated by teachers all across the fucking planet, if they want their students to actually pay attention and open their brains to free knowledge.