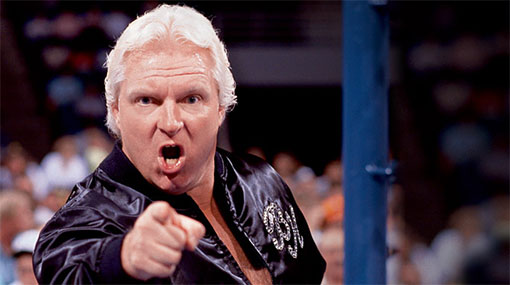 I’ve written a lot of eulogy-like posts about wrestling personalities who have left us, but this one in particular really hurts.  I don’t think I’ve pulled any punches about those whom I’ve admit to not being the biggest fans of, like when Roddy Piper passed, or Dusty Rhodes or even Chyna, but I’ve always had things to say about all of them.  That being said, when I say that this one really hurts, it’s because it is amongst the saddest of wrestling deaths in that not only the fans, but the industry as a whole has lost a genuine trailblazer and a man who whether they realized it or not, laid down the groundwork for generations of wrestling personas to this very day.

When I first got into wrestling back in like 1988, I was privy to have started watching in a time when Prime Time Wrestling on the USA Network was one of the flagship programs for the then WWF.  I can remember some of the matches I saw back then, like Ultimate Warrior vs. Haku, Mr. Perfect vs. Tito Santana, and Shawn Michaels vs. the Million Dollar Man Ted DiBiase.  This was during a time when WWF programming was typically several squash matches featuring stars versus definition jobbers, with a few of the aforementioned matches sprinkled in towards the end of each hour.

However, one of the other things viewers saw back then that stuck with me, was the studio segments featuring none other than Bobby “The Brain” Heenan and Gorilla Monsoon.  They would take care of the business aspect of television, such as promoting pay-per-view shows, live events (always at the Capitol Center), as well as doing typical wrestling commentary.  What I always remembered about those segments was that for a while, in front of Heenan’s spot at the desk, he had a “Ravishing” Rick Rude action figure standing over a fallen Ultimate Warrior action figure.  Little did I realize it was at that very time, Rude was feuding with Warrior over the Intercontinental championship, and basically Warrior was systematically going through the “Heenan Family” stable of wrestlers to get back to a point where he could and would eventually challenge and re-gain the belt.  But being a kid, I was just enamored by seeing action figures I wish I had very badly, on television in plain sight.

As I grew, Bobby Heenan was always something of a constant throughout the wrestling times; always in the corners of the best and most talented bad guys, and was always a source of verbal entertainment, even when I was a kid who didn’t really understand all the words and just wanted to see more good guys beat bad guys, and be devastated when they occasionally faltered, often due to underhanded tactics.  Even if I didn’t always understand what the Brain was saying, he was always delivering it in such a manner, that I felt like I could get it contextually, and I still found it entertaining.

Admittedly, as much as I always managed to find appreciation in Bobby Heenan as wrestling fan growing up, it really wasn’t until I started to go back and watch old wrestling shows as well as the fact that I was grown up, did I really truly see the brilliance behind all of his work throughout several decades.

Whereas I always found entertainment in the cadence and the delivery of his voice throughout the Royal Rumble in 1992 when Ric Flair entered 3rd, and lasted the entire rumble to win the vacant World Championship, it wasn’t until I re-watched it when I was much older did I really understand and find all of the humor in the things he was saying throughout the entire match.  Like when he said he would throw his own mother over the top rope for an opportunity to win the World title, and other sniping remarks, the 1992 Royal Rumble is a perfect example of match that isn’t just entirely watchable, it’s one that you could just as easily turn off the video and simply enjoy the insanity of Bobby Heenan’s commentary throughout.

When I was forced to stop watching wrestling because my parents sacked cable between the years of like 6-10th grades, one of the first voices I heard again when we got cable back was, none other than The Brain.  I remember this time well, because I had developed friendships with guys who were also avid wrestling fans, but had the capacity to have watched in the years that I couldn’t, and I was looking so forward to watching wrestling again when my family got cable television again.

It was an episode of WCW Thunder that was the first show I was able to tune into, and I remember the very first match of that particular show was Kidman vs. Prince Iaukea.  I had no idea who either of these two guys were, but I certainly knew one of the voices on commentary.  Apparently, The Brain was one of the countless talents that made the jump to WCW during that time, and it was the delight of the century to be re-acquainted to The Brain as he made clever criticisms towards Kidman’s unhygienic appearance, and how Iaukea could probably be a more efficient wrestler if he wore actual boots instead of insisting on wrestling barefoot.

One of the sadder days was when what seemed like out of the blue, Bobby Heenan wasn’t doing commentary any further.  Suddenly, Mark Madden and Mike Tenay were doing the commentary throughout the shows, and The Brain was nowhere to be seen.  The internet wasn’t quite as big or invasive back around this time, so I had no idea if this was because of WCW’s usual fuck-ups at negotiating with talent contracts, or perhaps this may have been one of the times when Heenan’s health issues may have started up.  Regardless, it around this time that The Brain really stopped being a part of the business on a regular schedule, which really sucked considering he was a part of my wrestling fandom for nearly 13 years.

It wasn’t until much, much later did I see Bobby Heenan on television again, and by this time, he had already been diagnosed and successfully fended off cancer of the tongue.  Granted, the battle didn’t come without cost, as it clearly took its physical toll on him, as he was a much smaller man, whose mouth moved differently, altering his voice somewhat, but once the words started to flow, it was undeniably the same Bobby the Brain.

Around this time, Heenan was lending his time and words to mostly do interview commentary for the WW now E’s burgeoning home video and documentary libraries.  Now the Ultimate Warrior DVD was one of the most memorable DVDs that the WWE ever released, but no short in part due to The Brain’s contributions, who succinctly and precisely held no punches about how he felt about the Warrior.  Without question, the best parts of the entire DVD were Heenan’s commentary, and just about every criticism he said was one that easily led to laughter from the viewer.

And then just like that, Bobby Heenan was seldom heard from again, at least on WWE television.  His health issues were pretty well known around this time, and it was no secret that he had cancer.  The thing is, I didn’t know just how bad things were until I started looking up pictures to use for this post, and saw pictures of a man that was physically a shell of his former self.  I had no doubt that behind the flesh and bone was still the whip-sharp witted man who could undress anyone with nothing but words, but it’s frightening to see what I didn’t bother to look for throughout the last few years.  Nothing was a bigger red flag that something wasn’t right than when the WWE released an autobiographical story about him and just about everyone contributed snippets of testimonial in it; everyone except Bobby Heenan himself.

Undoubtedly, Bobby Heenan was the greatest talker that the wrestling business has ever had.  Period, full stop.  People want to talk about guys like Paul Heyman or Ric Flair being masters on the microphone, but neither of them could hold Heenan’s jock when it came to being verbal maestros.  And without a guy like Bobby Heenan, there would be no comedy, no wit, and a large portion of potential entertainment value completely unavailable.

The Brain is truly in a better place than the rest of us, there’s no denying that.  It’s just extremely sad for us selfish fans, who never wanted to see the entire business lose a legitimate legend of an entire industry.

Happy trails, Brain.  May you reunite with, and lead guys like Mr. Perfect and Rick Rude to even greater heights in the afterlife.