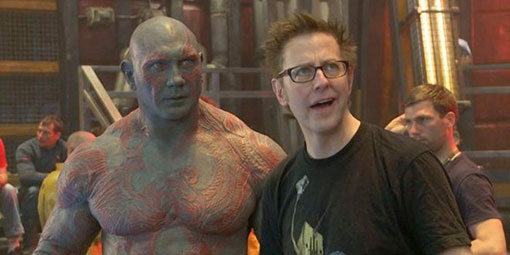 About as surprising as celebrities that pay to get their children into college: Disney reinstates fired and disgraced director James Gunn for Guardians of the Galaxy vol. 3

I think the only real question marks that come remotely close to being something of surprises, was when this was going to occur.  Considering the firing, which if you need a refresher, revolved around the fact that James Gunn was smart enough to tweet jokes about pedophilia, rape and other inappropriate subject matter on Twitter like a decade ago, which naturally stays on the internet for eternity, was unearthed, and therefore Disney shitcanned him; even though he received a tremendous amount of support from the entire Guardians cast, namely Dave Bautista who threatened to walk away from the series as if he thought anyone thought he was completely indispensable.

Naturally, the firing was as stupid as American politics, because really, who hasn’t said stupid shit, much less stupid shit on the internet at some point in time?  It’s just the fact that James Gunn was in an elevated position societally that made him a target for the trolls that actually spend time looking for inflammatory things once said to bring to surface because that’s the kind of world we live in now which totally sucks.  But Disney being the gozillion dollar company it is, seemed to think they can’t afford to have someone who made a careless innocuously insensitive series of tweets when he was young and stupid, felt that they had to do it anyway.  Did everyone also conveniently forget that Walt hated Jews?

Anyway, I understand why Didney did it, but it doesn’t change the fact that I thought it was stupid.  Naturally though, stupider is the obvious news that Didney brought Gunn back, which kind of also sends mixed, but also negative messages out to the inquiring public: namely the fact that by bringing Gunn back kind of says that Didney condones insensitive jokes about pedophilia, rape, the Holocaust and 9/11.