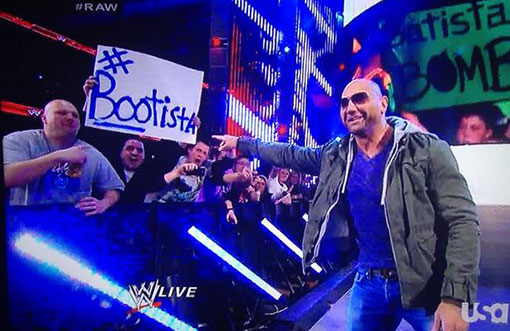 I know Dave is on this little high of thinking he’s a something big shot because he’s a former WWE champion and that he played Drax in the Guardians of the Galaxy franchise, but I don’t think he realizes that he doesn’t have as much clout as he thinks he does.  But thinking that anyone is going to join him much less care, by threatening to walk away from the franchise if Marvel-Disney doesn’t reinstate director James Gunn after firing him for inappropriate tweets from a lifetime ago, he’s going to be in for a very rude awakening at the results that will ensue.

I’m sure he got the impression that the actors could make a difference, after Chris Pratt’s earnest attempt to pen an open letter and get all the stars of the franchise to sign off on it, but in spite of his experience in the public eye as a public wrestler, he’s still relatively green when it comes to the world of Hollywood, which at the very core of it, gives zero fucks about any human being, cares only about money, and fully understands that absolutely anyone is expendable and replaceable.

Furthermore, I’m sure ol’ Dave thought that the cast and crew of Guardians were tight as knots when he made his declaration of wanting to opt out of future Guardians films if they didn’t bring back James Gunn, but the reality is that Gunn or not, the franchise is going to continue, and ain’t nobody from the righteous and current-hotness Chris Pratt all the way to James’s own brother Sean, who has been a bit part in the both films so far would be willing to walk away on solely principle from the money, prestige and exposure that a Marvel Studios film provides to all those involved.

Frankly, Dave Bautista has a tremendous amount to learn about way Hollywood works, and as much as admire his determination to stick to his guns, it’s simply not the best idea for a guy that barely has a handful of films worth mentioning under his belt to be trying to make such waves in an industry where the ensemble cast around him is most certainly not as willing to join the cause.

This isn’t a wrestling storyline where he thinks he’s going to be the paragon that stands up to the authority, and that by taking the first step and volunteering to sacrifice himself in order to save a partner, he’s going to see just how fast his co-signers of the open letter stand still with their mouths shut.  None of them are real-life superheroes despite playing them in film; when the day is over, they tried to fight for what they wanted, but the all-authoritative higher powers of Marvel-Disney decided that they didn’t want James Gunn in the director’s chair, and that’s simply something that all of them will have to and will likely be just as willing, to accept.

The question is if Batista will be smart enough to swallow his pride and renege on his threats to walk away so that he can continue to thrive and profit off of the Marvel money printer, and people will eventually forget and James Gunn will be forgotten and blown over, or if he’ll put pride first and actually walk away, only to join James Gunn on the unemployment train and likely go through a great deal of struggle to get back to the plateau the height of being in a Marvel franchise.

The answer to me seems fairly obvious, but I guess we’ll see when Guardians vol. 3 starts filming just what side of the fence ‘ol Bootista decides he wants to be on.