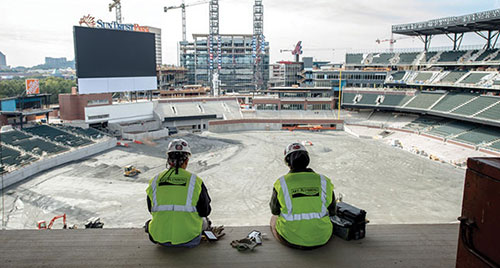 Not one bit.  Completely blindsided.  Never thought it possible.

Racist Park Great White Flight Field SunTrust Park, the future home of the Atlanta Braves, promised that it would not cost Cobb County residents anything (publicly) out of their pockets.  However, Cobb County has blown through its public parks budget, solely on the construction of SunTrust Park; and if Cobb residents actually want actual, useable, public parkland, a tax increase will be needed.

Yup, never would have imagined that SunTrust Park would actually fail to deliver on the promise that their construction wasn’t going to cost Cobb residents anything.  Who would’ve guessed this?

I mean, anyone who believed that SunTrust Park wasn’t going to cost residents anything also probably believe in the Tooth Fairy and the Easter Bunny.  Sure, it’s easy to say that the funding is going to come solely from hotel taxes and other means, but wherever there is a general lack of transparency, the public is going to suffer, whether they realize it or not.  Be it through some sort of tax break that inhibits the cash flow in some sort of public function, or this hilarious publicly revealed snafu of the county blowing through its parks budget and now needing to raise taxes to fulfill its financial obligation, stadium construction is pretty much one of the worst rackets ever.

Fucking millionaires and billionaires collaborating with (read: bribing) governments to organize the construction of these gaudy monstrosities at the expense of citizens, promising rhetoric like economic improvement, raised land value, and winning sportsball.  But failing to mention that the timeline for such benefits are lifetimes long, and dependent on a myriad of variables that align as frequently as planets.  Meanwhile, the payout for investors is immediate and bountiful, and the rich get richer, while the plebes that basically paid for everything have to suffer the everyday consequences of construction, traffic, human congestion as well as increased taxes.  Seems like a real win-win for everyone, huh?

Oh, Braves.  How I want to really still be a fan of the baseball team, but I can’t help but loathe and deplore the disgusting self-proclaimed real-estate-business-not-a-baseball-business pieces of shit that run the organization.  I take out my disdain for them, by rooting for tragic losses, a 121-loss season, and general organizational failure from all parties involved, because ironically, it’s really the only way the public can actually get a modicum of retribution against these shitheads; by suppressing attendance and ticket sales.

How I wish for the failure of SunTrust Park, but dickish behavior is if anything, tenacious.  And as much as it sucks for Cobb residents, it looks like they’re going to have to pony up and pay extra pennies here and there, so that a corrupt baseball park whether they support it or not, can continue to be built on schedule.