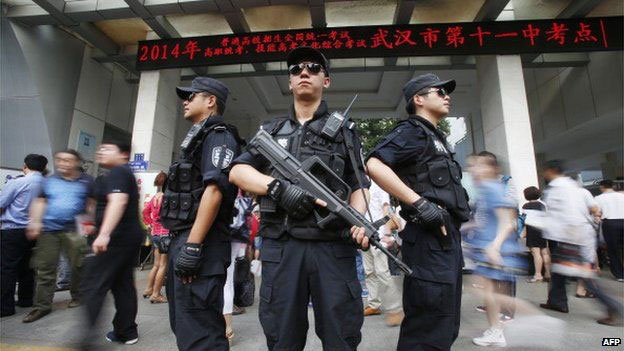 It’s punishment; for cheating; on the gaokao.  I use all those semi-colons deliberately, because it’s my duty to goof on China whenever I can, and the truth of the matter is that I still think the Chinese are the biggest cheaters on the planet, and in spite of their refreshingly Draconian punishment when it comes to their national educational placement exam, they still cheat on just about everything else they think they can get away with.

Sure, they still have problems with Little Emperors running rampant throughout the country, with their parents being completely inept, incapable and unwilling to actually discipline their fucking kids from destroying public displays or museum exhibits, but it’s nice to know that when it comes to education, China is pulling no punches with their aspirations to punish exam cheaters.

I mean seriously, even at my most sadistic, I don’t think I could’ve dreamed up a seven-year jail sentence for cheating on tests.  It certainly seems like it’s severe enough to make would-be cheaters think twice about trying it.  Also, it’s kind of amusing to see what a society with lax cheating ideologies try to play the game of trying to outsmart the exam administrators who are going to some big measures to prevent cheating; all while overlooking the notion that if the effort to cheat were instead diverted to actually studying, then everyone would probably ace the gaokao to begin with.

But here comes the agenda of this post – it’s pretty astounding that children in China are subject to punishments of up to seven years of jail time, for cheating on a test, that physically harms no human beings, while a guy in America can rape a woman, and get just six months in prison.  Sure, there’s a whole other agenda within this story that’s entirely swirling around the inequality of race perception, but that’s a can of worms that I don’t need to open that couldn’t be found anywhere else at this point.

The point is, it’s completely embarrassing that the fucking Chinese can get punishment right, while America can’t overcome it’s own racism to properly sentence A RAPIST.  Seriously, in some parts of the world, rape is probably still punished by death, but as long as you’re white in America, the punishment FOR RAPE is pretty much the equivalent of getting sent to your room for not finishing your fucking brussel sprouts.