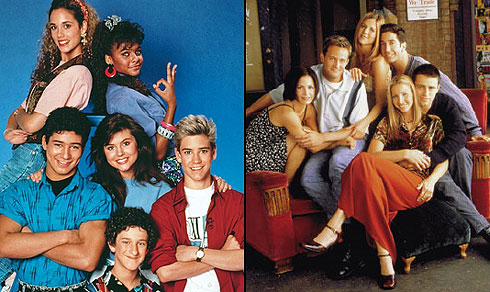 So the last few mornings, while I’ve been doing my morning workout routine, I’ve been watching a lot of Saved by the Bell.  Much to my delight, it has been on in some ridiculous three-hour marathon pretty much every weekday morning, at the same time that I’m up and doing my morning routine.  For the last two weeks, every morning has been kind of a trip down memory lane, in some respect.

However, the episodes aren’t exactly placed in any particular order; some have been right after the Miss Bliss era, and they’ve jumped as far as into the College Years afterward.  Not that it’s any big deal to me since I’ve pretty much seen every single episode, but it did make me notice something, which is the chief reason why I decided to kill my last day on this particular assignment in Lithonia (which Lithonia sucks; when a Starbucks fails, you know the region is devoid of any success) with writing about a comparison . . .

Saved by the Bell was the show Friends, before Friends was Friends.

It’s not as cut-and-dry as maybe comparing Mass Effect to Secret of Mana, but there are plenty of things that make them so very similar.  In fact, one might be able to say that Friends was essentially the eventual evolution of the cast of Saved by the Bell to some capacity, from character correlation to the audiences themselves.

Saved by the Bell ended somewhere in 1993, and Friends debuted in 1994.  This time frame was pretty effective at bridging almost maturation gap between probably some of the older, or more mature Saved by the Bell fans into another ensemble cast of three males and three females of Friends, as they try to make their way through the world.  Gone were teen issues like teen drinking, caffeine pills, and high school, and born were grown up issues, such as job searching, relationships, and living arrangements.

Yeah, I’m aware of how weak my argument is here, but bear with me, I’m no longer at work anymore, since I’ve been granted a nice early dismissal, but I’ve already started this snowball, so it’s my determination to ensure that I finish it before I run off to play more Mass Effect 2.

But the argument wouldn’t really work if there weren’t key similarities between the characters of Saved by the Bell and Friends.  With three core males and there core females in both series, it would easy to simply pair them up by gender, but I’m afraid that in my eyes, it doesn’t quite work out that way.  So without further ado . . .

Zack Morris is Rachel.  Both were easily the most synonymous characters for their respective shows, and both were given the most spotlight throughout the durations of their shows.  Zack easily was a larger focal point to SBtB than Rachel was to Friends, but the point still stands, that both were more or less the centers of their universes.  Throughout the series there is a fascination of pairing the characters off with other characters, even if it’s just for an episode or two, and very short lived.

Zack had his on-and-off relationship with Kelly Kaposwki, and had a brief flirtation/make-out session with both Jesse Spano and Lisa Turtle; very much easily discernible as show creators caving into the fan demands to see their fantasy pair-offs, even for just a single episode.  Now I can’t say for sure if Rachel ever had anything to do with Chandler, because despite all my boorish claims, I really didn’t watch or care about Friends, but I do know for a fact that she banged both Ross and Joey in the show’s ten year run, and it’s safe to bet that the Joey fling was very much fan demand.  But if Zack and Rachel are supposed to be the same, that obviously means that . . .

Kelly Kapowski is Ross.  The reason I say this is that no matter how many times we’ve seen Kelly with some other dude in the series, whether it’s another high schooler, or the college guy, or the college professor, nobody really cared.  Everyone knew that Kelly would end up with Zack in the end, and therefore, nobody could ever genuinely take anyone Kelly was with seriously.  The same goes for Ross.  NBC tried to give him other women, Asian girls, other museum curators, or whatever fuck Ross did, I don’t really care, but it was apparent that fans just didn’t care.  In the end, it would have to be Ross and Rachel.

This kind of back-seat treatment is clearly evident with both characters, despite the fact that both Zack and Rachel would go on to have several other on-screen romances with seasonal characters or one-offs, that fans actually took seriously.

A.C. Slater is Monica.  Face it, Friends was predominantly more popular with women then it was men, so it’s easy to tip the priority scale in favor of the female characters.  If Rachel was the alpha, then Monica was second in command.  Such is A.C. Slater’s role in comparison to Zack Morris.  Where as Zack and Rachel are never really shown with any genuine talents other than charisma and being eye candy, both Slater and Monica have been shown with actual talents.  Slater was the star athlete that could pretty much do everything from wrestle, play football, dance, and fix cars, and Monica was apparently a very talented chef.  Sure it’s 4-1 in Slater’s favor, but that’s 4-1 compared to 0-0 against Zack and Rachel.

In the ever-important relationship front Monica, being sister of Ross, thus eliminating one of the guys from contention, as well as Slater, truly ends up with one other character throughout the series.  Both are shown throughout the series having dated / flirted with other tertiary characters, but nobody really cared about their relationships until it came time for them to have one with another core character.  So if Slater and Monica are one and that same, that obviously means that . . .

Jesse Spano is Chandler.  This is kinda easy too.  Both suffer from the syndrome of the necessity to be the smartest person in the room.  Now Chandler does it with more sarcasm, but both of them are capable of being annoying as fuck with their buzz-killing insistence of being the smartest person present.  All throughout both series, viewers are led to pity and wonder why both Jesse and Chandler fail at relationships and have such lower opinions of the world around them.  That is until we’re all steered into the eventual relationships with their counterparts.  Suddenly the spotlight started shining brighter when the seeds of a Jesse/Slater and Monica/Chandler romance were sown, even if Monica really was just trying to nail Joey while she was horny, because no matter how hard they tried, Screech had no fucking chance getting with Jesse.

Screech Powers is Phoebe.  This is a little unfair, because Screech is an ugly loser now and forever, and Phoebe’s got a rocking body and awesome tits.  But in the personality front both are batshit retarded, and exist a lot solely for comic relief.  It is a little difficult to also not pull the retard card out on Joey, because he was a fucking imbecile as well, but he wasn’t nearly as strange as Phoebe was.  They also both share the dubious dis-honor of not actually really getting with anyone seriously throughout the series, but at least Phoebe almost got some action at one point, when she almost nailed one of the dudes on a pool table.

Lisa Turtle is Joey. I admit, a lot of this has to do with process of elimination, but digging enough does yield a little bit of similarity.  Both Lisa and Joey, much like Screech and Phoebe do not end up with anyone, really.  Both are vain individuals who base their characters’ actions a lot on appearances and fashion; Lisa wants to design clothes, Joey wants to act.  In some convoluted way, they have similar goals to simply look good for their own betterment.

And with that, I provide my argument why Saved by the Bell laid down the groundwork for what would eventually turn into Friends.  I just didn’t feel like working Mr. Belding into this equation, either, because now, it’s time for me to enjoy my holiday weekend, and go play some Mass Effect 2 or something.