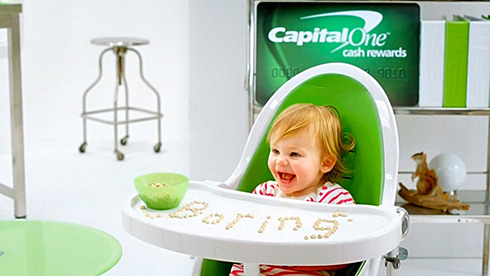 I’m not much of a credit card user.  It’s part of how I generally remain impervious to credit card debt, because I sparsely use them.  That being said, I still have a few lines of credit here and there and one actual credit card for general use.  And for the last 13 years, it’s been a Capital One credit card, because they were the smart company that capitalized on the recent high school graduates and gave them all offers for (most of) their first credit cards.

Naturally, being the financially reckless teenager I was back then, I took them up on it, and I got my very first credit card with a fairly decent interest rate, and a paltry $200 limit.  A year later, it was without warning bumped up to a $500 limit, and it couldn’t have happened at a better time then, because I in a relationship and wanted to have the financial flexibility to indulge for two.  Eventually my limit was bumped to $2,000, and that’s where it’s remained since.

I maxed it out and paid it off, and since then it’s been nothing more than a rainy day fallback, and a resource to secure hotel rooms and car rentals.  Every time I use it, I pay it off in full, and I haven’t paid interest on anything with it in about five years.  Needless to say, I’m somewhat of a model of intelligent credit card use, if I say so myself.

When I was dealing with the debacle of the lemon car I had a few years ago, I had some genuine concerns about my finances at that time, since my state of employment was also very sporadic and always in a constant state of flux.  Although I didn’t get to such lengths, I felt that I wanted a higher credit limit due to the fact that there were a lot of car repairs and necessity for difficult-to-acquire parts in the works, and to have a decent amount of breathing room.  I reached out to Capital One and requested a credit limit increase.

When these so-called explanation letters came in the mail, there was no explanation in them at all.  It was basically a letter summarizing the fact that I had requested a credit limit increase, and that they were denying said request.  Nothing else.

The best part however, is that I have a family member that works for Capital One.  When I asked him why I wasn’t getting a limit increase, he gave me some convoluted, canned-corn bullshit rationale about how they already have a general picture of my financial standing and all sorts of other legalese that accomplished its job of making me tune out the rest of the words because I knew there was no answer in the explanation.

Here’s another reason why Capital One sucks; in spite of my responsible history and non-delinquent standing, they wouldn’t let me move my account to another type of account that could accrue me any sort of reward or kickback.  Now I know banking on spending rewards and points or some other incentive to use their shitty card in the first place is somewhat silly, and often requires a massive amount of use for it to actually amount to anything, but come on, anything at all, is better than zero kickback.  So there are LITRALLY.  Years of Dragon*Con hotel stays (which often times encroaches $1,000), all the hotels I’ve stayed at for baseball trips, car rentals, and just thousands of dollars throughout the last few years that have gone completely unrewarded.  I would have taken a $10 Starbucks card in thanks for using their service, over nothing at all.

So 700 words later, we get to the point, which is that after about a year or two of saying how much I hated Capital One and how I needed to get a new credit card, I finally made it happen.

After years of making Las Vegas trips, only to watch the reward points, at least in Harrah’s properties, degrade and vanish due to six-plus months of account inactivity, I decided to rectify that problem in the future.  I took my business to the casinos and got a Total Rewards credit card that allows me to maintain my reward points, and actually accumulate more, with the same shit I normally spent my credit card on in the first place.  I don’t use my credit card that often, but it’s safe to say that I use them at least once within a six-month span, so basically I now have a way of keeping my TR tier score not only sustained, but constantly growing.  Sure, it’s not as much as when I’m actively gambling, but it’s a great way to keep the possibility for free rooms and other shit in Las Vegas open.

The best part is that already I’m seeing the benefits, being with TR.  Before I even got the physical card, I was already given a pair of free buffets, for the next time I’m in Las Vegas.  Also, as a courtesy, they bumped my TR status to Platinum from Gold (AKA the status everyone else is), which doesn’t sound like a lot, but it entitles me to skipping long lines at many Vegas restaurants, and a small discount on any food or merchandise purchase I make at any Harrahs property.  Sure, neither sounds like that big of a deal, but keep in mind Capital One didn’t give me absolutely shit in the 13 years I was with them.

Technically, I haven’t closed my Capital One account yet, because there is one last engagement that I don’t want to complicate by not having matching cards that is coming in October, but I’m very much looking forward to the aftermath when there is absolutely nothing else tied to it, making it ready for closing.  I could very easily do it online, but I actually want to get someone on the phone; I know they’ll very well not give a flying fuck, but I want to tell an actual human being how much their company sucks and that I’m, with great pleasure, cancelling my Capital One account, forever.