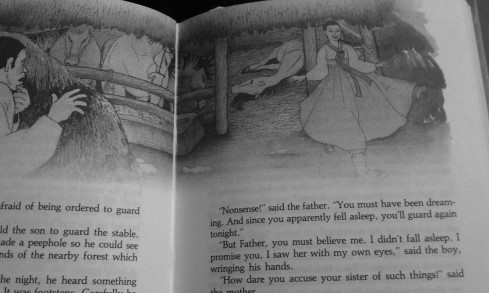 Ahri is a character from the online arena game, League of Legends.  She’s based loosely on an Asian mythical nine-tailed fox, that depending on which country you’re asking, has variations on its story.  Most of them depict the nine-tailed fox as an evil creature, mostly utilizing deception, trickery, and/or seduction to commit its evil deeds.  But since the design of the character is so leaning towards Korean in appearance and clothing, I’m lead to the belief that it’s a Korean iteration, the character is loosely based around.

I have this book of translated Korean fairy tales, that a cousin got for my sister when I was young that I somehow came to inherit.  It’s full of entertaining stories and a glimpse of culture differences, but one of the stories dealt with the nine-tailed fox.  And as is the case with most stories involving the nine-tailed fox, it’s evil, and it’s out to kill shit.  But the origins are essentially the same; girl is killed by the nine-tailed fox, nine-tailed fox takes the form of the girl, starts wrecking shit up.  In this story, Ahri kills horses and eats their livers, before killing her parents eventually.  Her brother is eventually the one who kills her, and in the aftermath the true form of a corpse of a fox with nine tails is discovered.

But the above imagery is a stark contrast to the sexified Ahri that’s available to play in LoL today.