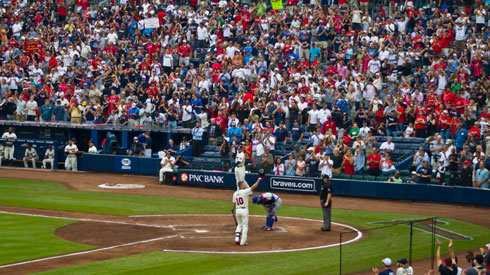 My last post over at Talking Chop went up yesterday, and I thought that I would feel a little bit emotional over it, since it was my primary sports writing-related outlet I had over the last four years, but I really didn’t.  To be perfectly honest, I didn’t really remember to check it until late last night, so in some respects that kind of was indicative of how much I had already kind of checked out when it came to the whole site entirely.  I probably felt more emotions while in the process of writing my farewell statement, which I started on Tuesday and re-read and edited throughout the course of the week.

I’ve got no regrets in doing it, now that it’s done.  It’ll really sink in on Wednesday or Thursday afternoon, when I’ll be sitting at my desk thinking “oh shit, I have to write my column,” but then realize that I actually don’t, and then I’ll feel a sense of relief wash over my like an awesome wave.

Coming clean, not that I really expect any TC readers to actually find and read this unless I had some especially fervent e-stalkers who really wanted to find me online, but I have to say that I really disliked the corporate direction the parent blog hosting company was going.  Sure, I’ll often cite my reasons for leaving as primarily as “I didn’t feel like doing it anymore,” which is entirely true, but it’s not to say that I didn’t dislike several other things about the gig either.  Surprisingly, it’s not really the trollish members either; that’s to be expected with an internet audience of great numbers, I just don’t engage them or rebuke them whenever their targets are set on me; in time they give up because they can’t get under my skin.

But the corporate structuring of the site and its parent company as a whole were pretty demotivating factors in the grand spectrum of things.  By declaring a mission statement of “United,” and then stripping every single site in every single sport of their identity and uniqueness, and creating a litany of cohesive logos that looked more like Boy Scout badges or Pogs, all while going into a site format that was clearly prioritized to favor tablets and eReaders over people on actual computers, really dehumanized TC and all the other sports blogs in the network.

If it’s not obvious, I’ll come out and say it, but I really disliked “the new look.”  It diminished the importance of words, by making them look more imposing and space-consuming when used en masse, due to the massive font size, making verbose writers like myself more apprehensive about using them with a subliminal fear that we’d bore the reader with walls of text.

When it comes to blogs, words should never be, or be made to feel, second fiddle.  Never.  This wasn’t a fucking Tumblr.

I have to say though, and it’s not like I wasn’t expecting it, but all the people that have come out of the woodwork to wish me well on my future endeavors and say thanks for all the years of posting; it was a pleasant surprise.  I have to imagine most of it has to do with the fact that people in general, inherently are apprehensive about change, and with myself leaving along with three others, that’s pretty much the entire staff from the 2011 season all departing.  I am appreciative to everyone who said thanks.

But it’s nice to leave on a high note, and more importantly on my own fruition.