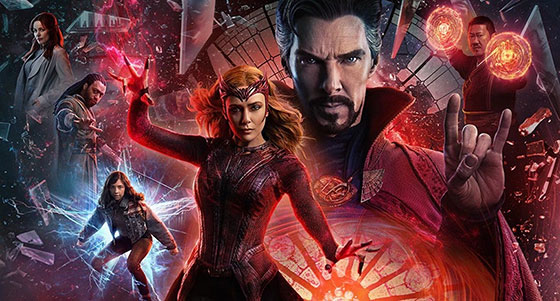 The worst part about big blockbuster and/or Marvel films is the feeling that if you don’t see it immediately, as in opening night immediately, you will inevitably get spoiled in some capacity within the next 24 hours.  Be it some passing graphic on social media, a news feed analyzing a massive spoiling plot point, or some rando internet friend who thinks they’re way more clever than they actually are and giving away something critical, if you don’t watch the film with some sense of urgency, you will without uncertainty, have something ruined for you.

Ironically, I’m not even really that big of a fan of Doctor Strange.  I wasn’t ever a fan of his in the actual comic books, despite knowing he was something of a big deal considering just how many crossovers he ended up in.  The MCU, as it has demonstrated on numerous occasions, made him somewhat cool and digestible, and I think Benedict Cumberbatch has breathed adequate life into the character.

The first film, I didn’t even see in a theater and instead watched it on an international flight, since I had 8-13 hours to kill in the air, which wasn’t too bad.  The funny thing is that he’s way more interesting in other characters’ films than his own, but obviously for the sake of moving the entire MCU phase plot along, of course he’s going to get his own film(s) from time to time.

Spider-Man: No Way Home was a no-brainer of a film that had to have been seen with urgency and I’m glad that I did.  And Doctor Strange was pretty good in that film as well as an extremely critical player in the grand spectrum of the plot.  But ultimately, it ended up being more obnoxious and feeling like a sense of inconvenience that I had to put forth the same effort in order to see Doctor Strange 2, even if it seemed like this was going to be a critical film in the overarching MCU phase storyline; it’s still Doctor Strange, a character that I’ve always been kind of ambivalent about, in general.

Regardless, mythical wife and I made a point and made some arrangements to where we were actually able to go out for a night and watch Doctor Strange 2: The Multiverse of Madness.  My general theater experience was tarnished by the shitty quality of service we had and I never got my actual fucking entrée and they had the audacity to try and get me to pay for it, but as far as the film itself went, it wasn’t that bad.

Cumberbatch once again makes Doctor Strange not so much of a square, and injects some actual personality into the character.  And I suppose it’s not too much of a spoiler to say that the film basically ends up becoming the film sequel to WandaVision, seeing as the Scarlet Witch was primarily featured in the post-credit preview of the film after Spider-Man, not to mention Elizabeth Olsen is very predominantly featured on all film advertising.

As predicted, the film does kind of blow open the MCU in general, and between this film, the events from the Loki television series, and a lot of the shit alluded to in No Way Home, it’s almost brain-bending on how Marvel is even going to proceed from here, not to mention they’ve unlocked the ultimate plot devices that effectively allows any and all properties to be retconned and revised at a moment’s notice.

But as a standalone film, I’d say that DS2 is about a 6-7 out of ten.  A lot of crowd-popping cameos and ah-ha moments don’t really mask that the core plot of the film was a little on the weaker side of things, and there’s some pretty big plot holes that are poked open in WandaVision that beg to be asked.  The film effectively acts more like a vehicle to the overarching phase and tends to lose track of the fact that it’s still supposed to be about Doctor Strange, but all in all, I was still entertained and walked out of the theater ready to discuss and try to suppress excessively mansplaining anything that mythical wife might not have been familiar with.

However, back to the original hypothetical, on whether or not Doctor Strange 2 is worthy of being a must-see on an opening day?  I wouldn’t say so.  But solely because of the fact that I didn’t want to be spoiled to any MCU-isms and ah-has, I still felt like I was forced to do so, which makes me feel a little bit resentful of the way social media and the internet has created such a dynamic.  Fuckin’ ruins everything.