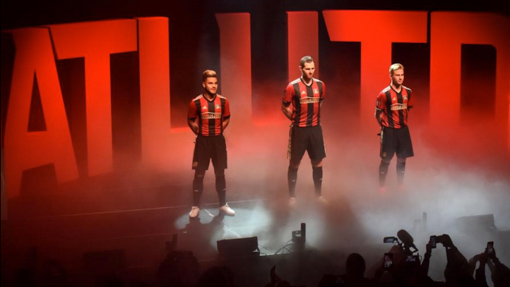 Atlanta United FC unveils their official team uniforms, they turn out to be red with black stripes – almost entirely how I had predicted.

Don’t get me wrong, black and red is a cool color combination.  Very hard, very urban, kind of counter-culture.  Black denotes something a little bad, rebellious, with a dark side.  Everything goes with black.  Black and red is the nWo Wolfpac, the supposed cool nWo, as opposed to the old fogey Hulk Hogan led black and white nWo.

But black and red is also the same color combination used by the University of Georgia and the Atlanta Falcons.  I’m pretty sure the Atlanta Hawks have at least one alternate uniform that’s black and red.  If it were even remotely justifiable, there’s absolutely no doubt that the Atlanta Braves and Georgia Tech would bust out a black and red alternate uni if they could.  If Mitchell & Ness actually make hockey apparel, they’re probably already trying to figure out how to incorporate black and red Thrashers merch as throwbacks to the now-Winnipeg Jets.

Black and red is old hat, played out, overdone, here in Atlanta.  Lining everything in gold trim doesn’t change the fact that all anyone will primarily see are blacks and reds whenever Atlanta United FC is playing.

Not only is black and red played out in the city, black and red is kind of played out in the entire sport of futbol.  It doesn’t take a Google wizard to seek out a query such as “black red stripe soccer uniform” to reveal that at least three other soccer clubs throughout the world have basically used the exact same red and black stripe based uniform: AC Milan (Italy), Manchester City (UK) and even a fellow MLS team, formerly known as the New York MetroStars, used the red and black striped uniforms.

It’s almost like there were extra MetroStars uniforms stashed away in some MLS storage unit, and when word came out that Atlanta was interested in black and red, MLS pounced at the opportunity to recoup some losses and repurpose old jerseys.

It’s kind of like how after the Washington Bullets traded away Rasheed Wallace and then drafted Ben Wallace in 1997, and coincidentally gave him #30; it saved money!  (I wonder what the conversation was like in 2004 when they both landed on the Pistons)

But anyway, in spite of all the rhetoric from Arthur Blank, KaseemsLikeWeNeedMoreNewStadiums Reed, and any other paid talking heads to spread the good word about Atlanta United FC, there is no diversity, there is no auto-association with the team with these uniforms.  How can there be diversity, when they’re the same colors as two of the other most prominent sports franchises in the city?  How can there be association when they’re practically visually identical to at least two active franchises in the most globally recognized sport on the planet?

If genuine uniqueness was the goal, why not make the team colors like, pink and lavender or something?  They might not sell great to consumers, but imagine the anxiety and pressure to opposing players, not wanting to lose to the team with such effeminate colors?  Winning the battle before the battle is half the battle in sport.

lol, American Family Insurance.  I wonder where they rank compared to like State Farm and Allstate?  Apparently third.  Seems appropriate though.  A third rate company to sponsor what will inevitably be a third rate soccer franchise playing in a third rate futbol league.  Ironically, that being said, I would still wager money that this team will win a championship before the Falcons, Hawks or Braves do, because sports are funny like that.

Either way, I whipped together a comp way back when primarily as a snarky ironic joke.  Little did I realize that it would be almost entirely true in the end, but then again, in a twist of irony, unoriginality and repetition kind of are symbolic of Atlanta.