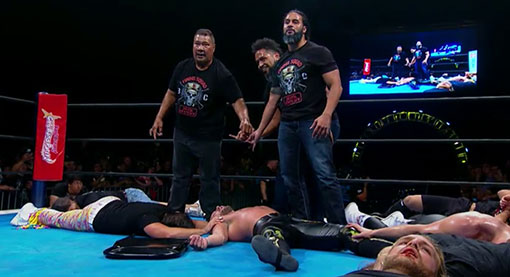 Just a few weeks after I’d declared my utter disgust over the mainstream uncoolness of Bullet Club, it’s almost as if bookers from New Japan Pro Wrestling read my words, and did something about it.  Surely, I’m not the only wrestling fan out that there that thinks the Bullet Club is worse than DJ Tanner Wrestling these days, and I was ecstatic to see the next rival stable emerge and basically declare war on them.

But that stable being composed of none other than the legendary god-beast and toughest motherfucker on the planet, Haku, and his two sons Tama and Tanga?  I couldn’t possibly have dreamed of a better or more appropriate person and his offspring to systematically decimate all the rest of Bullet Club by themselves.

Seriously, I think Haku became a bigger star than he ever was during his career, after it ended, due to the evolution of the internet as well as all the former wrestlers out there who released autobiographies.  Be it through shoot interviews on YouTube or in personal memoirs, suddenly anyone who was in the business between the 80s into the early 2000s had a Haku story to share, because back in those times, the boys always ended up at bars or dives, and it wasn’t nearly as well known that wrestling was scripted, and local tough guys always wanted to start shit with wrestlers.

Despite the fact that general sentiment shared by most about Haku is that he’s a gentle and respectful person who just wants to mind his own business and provide for his family, he seems to be a magnet for trouble, and almost always ends up on the receiving end of harassment, to which the monster comes out when he’s forced to defend himself.  Guys getting eyeballs ripped out, noses bitten off, fish hooks and broken teeth, most idiots don’t seem to realize the idiocy in provoking a 300 lb. Tongan in a bar.  Even the cops weren’t safe from the wrath of Haku, when they had to try and either incapacitate or outright arrest him; tales of him snapping off handcuffs, inhaling the mace they tried to spray him with to simply beating the shit out of cops, nobody was safe once the monster got woken.

After hearing all these tales of how he was the baddest motherfucker on the planet, it was a shame that the vast majority of his wrestling career was over, save for the sporadic cameo appearance in the indies.  It was well documented how smoothly his everyday life was going in retirement, managing the detailing department of a Toyota dealership down in Florida.  After all this knowledge was made available of how dangerous of a man Haku really was, who wouldn’t want to see him get in the ring and decimate an endless number of wrestlers who may look more polished and chiseled, but have a fraction of the legitimate toughness of Haku.

But now, it appears that King Haku has decided to take some vacation time from the car detailing business, and go into the business of decimating some lame modern day nWo b-squad in Japan for a minute.  I’m not going to pretend like this is truly the end of Bullet Club, although I really wish it were.  It’s gone on long way longer than it needed to, and it’s legitimately at the point where it’s operating just like the actual nWo b-squad that was like Stevie Ray, Virgil, Horace and Brian Adams.

The only ones people really care about are Kenny Omega and the Young Bucks, and they’ve literally distanced themselves from the rest of the group by calling themselves The Elite (and now the Golden Elite with Kota Ibushi).  Nobody gives two shits about Fale or Chase Owens, and Yujiro Takahashi and Taiji Ishimori don’t really belong in the club considering it was intended for gaijin only.  At this point, Adam Page and Marty Scurll are behind held back by the stable and would be better suited on their own frankly.  And as much as I admire Cody Rhodes’s talent, it’s never not been weird to me that he’s in Bullet Club.

My only objection to Haku’s family stable is that they’re still calling themselves the Firing Squad under the Bullet Club banner.  As a result, their shirts look similar to the same crappy mainstream oversaturated Bullet Club t-shirts that are fucking everywhere, and is the primary reason why I most definitely do not want one.

The chances are higher that this is kind of a feud of the month, and within a short amount of time, the Tongan uprising known as the Firing Squad will be neutralized and it’s back to Bullet Club dominating everything again.  But for the time being, I’m completely stoked to see King Haku back in the ring again, and with the aid of his two sons, is putting the hurt down onto the lame-ass Bullet Club standard.

I hope we get a healthy dose of more Haku destroying Bullet Club members like jobbers, and I want to enjoy every single beat down like it was 2000 and Mike Tenay screaming “look at all the bodies!!”