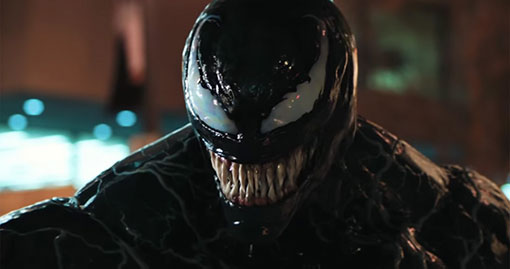 No seriously, that’s not meant to be a rhetorical question.  Aside from knowing that a Venom film was in the works and that it was going to star Tom Hardy, and seeing a single picture of what Venom was going to look like, I couldn’t help but have this feeling that Venom was on the fast track to becoming an automatic stinker.

Really, I’ve got no basis at all to really believe that this movie is going to be bad, but I just can’t help but assume that this movie is going to blow.  A little bit of cursory research about the film only justifies the belief, like finding out that it’s most certainly NOT a Marvel Studios film, but a Sony Pictures production, which we all know how good their last few things have turned out.

Furthermore, as a result of Sony having already forfeited the rights to Spider-Man, really makes me wonder how a stand-alone Venom film could even come to fruition, considering the fact that the entire basis for the Venom character is basically Spider-Man’s dark side manifested through symbiosis.  Or, it’s the same Venom that was once bonded to both Tobey Maguire Spider-Man and then Topher Grace Venom, and they’re going to do away with Eddie Brock outright.  But either of those are still terrible ideas, and just feeds into the thought that Venom is doomed before it even comes out.

Man, how much must it suck to be Tom Hardy in this case?  The guy had built up so much equity after being featured in such popular films like Dark Knight Rises and Mad Max: Fury Road, and then his career seems to be slowly rotting with a bunch of obscure films, or that shitty FX show, Taboo.  And then one day, his agent comes to him and tells him of this great opportunity for a lead role in a Marvel film… conveniently failing to mention that it’s a Sony Pictures Marvel film and not a part of the vaunted Marvel Cinematic Universe.  So while guys like Robert Downey, Jr., Chris Pratt, Chadwick Boseman and even Paul Rudd are off gallivanting on the MCU money printer, Tom Hardy is left sitting on the rotting corpse of the Sony/Marvel universe, starring in a guaranteed stinker that’s apparently giving away discounted tickets before the film even releases.

Maybe he’ll be as lucky Chris Evans and I want to say Josh Brolin, but Deadpool 2 was probably the crown jewel of the FOX/Marvel universe, and get to reprise a second role in the MCU.  But by the time that happens, all the good properties might already be gone, and he’ll have to be… maybe Venom, again?  Wouldn’t that be some shit??

Either way, I get that it’s really unfair to judge something so viciously for something that isn’t even out.  But I can’t shake this feeling that all signs point to this film being really, really bad.  Seriously, how can you make a stand-alone Venom film without any trace of Spider-Man?  It pretty much means that this iteration of Venom won’t have all of Spidey’s powers, and will just be a glorified tentacle monster that looks like Venom, but will lack just about any traces of Spider-Man-y elements that defined the character.

Needless to say, I have zero intention of paying money to go see Venom.  It’s not even a film that I’d go see if I were given a free ticket, because it doesn’t even seem worth the cost of fuel and time to go to a theater to watch it.  However, I will say that if a less-than-ethical means of being able to see it comes along, and I can watch it in the comfort of my own home, I would then and only then feel some compulsion to watch it, kind of like out of the same morbid curiosity that made me want to watch the House of the Dead Uwe Boll film.