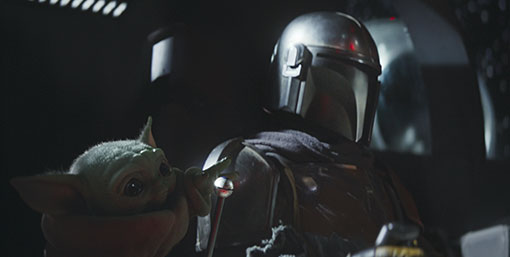 It was kind of interesting watching through The Mandalorian leading up to, as well as after watching The Rise of Skywalker.  Going into The Rise, I can’t say with much certainty that I was particularly looking forward to it other than the fact that there’s always some sort of nerdy obligation to see Star Wars films fairly immediately upon their release.  In contrast to after watching the first two episodes of The Mandalorian, I bought in, and as Disney+ released them at an agonizing weekly episodic pace, I looked forward to each on a weekly basis.

Now it’s a little unfair and partially not quite an adequate balance comparing a television series to film, but when I sit back and think about everything I’d taken in that are all part of the Star Wars universe, the ultimate takeaway I really have is how much I really enjoyed The Mandalorian, versus how lukewarm I am as it comes to not just The Rise of Skywalker, but just about all Star Wars films released within the last decade.

In all fairness, I did really enjoy Rogue One, but when the day is over, Solo just kind of existed, and I’m at a push when it comes to the latest trilogy; The Force Awakens was a fantastic film, but The Last Jedi was pretty awful, and The Rise of Skywalker spent 80% of the film digging itself out of the chasm its predecessor put it in.  But as a whole, the decade’s Star Wars films all add up to a widely mediocre median.

But The Mandalorian, I thought was exceptional.  If I had a Disney+ subscription, I’d say that this show is probably easily the hard carry of the entire service so far, but that’s really not saying that much considering it’s basically the only piece of original content they have so far, but I guess what I’m really saying is that it’s almost worth the price of a subscription just for this show, it’s that good.

To cut to the chase, what I really loved about The Mandalorian, aside from how it was short and sweet, was that boiled down, the show simply has a heart.  They don’t waste a lot of time trying to piece together a complex plot, or weave a web of characters and potential storylines; they move in a very linear path from episode to episode, introduce characters who are immediately used, and then move right along.

In spite of the breakneck pace which is a contrast to how the films operate, the show still thrives by not being too complicated, because they have a very simple premise of Mando simply trying to protect Baby Yoda.  But by following such a simple equation, the story grows a heart very quickly and each ensuing episode beats steadily as the storyline eventually unfolds to not a lot of complexity and moves seamlessly to a logical and open-ended conclusion.  It kind of reminded me of a lighter-hearted, sci-fi version of Lone Wolf and Cub.

The performances of the limited cast was great, and some thoughtful and enjoyable characters were introduced in the process.  Kuiil was such an honorific character, and the fanboy in me was delighted to see Gina Carano make an appearance as Cara Dune, the former rebel shock trooper who just wanted to live in peace and brawl a little on the side.  It was also a treat seeing the revolving door of various celebrity cameos who appeared throughout the series, seeing all the people who wanted to dip their toes into be able to say they took part in a piece of Star Wars.  Plus, I got to make the obvious Mulan joke when Ming-Na Wen made her return into the Disney family with her brief cameo.

But the obvious star of show was The Mandalorian AKA Mando AKA Oberyn Martell.  What I was often most astounded by is how despite the fact that Oberyn Martell is wearing a Mandalorian helmet throughout the entire show, his range of emotions are still so easily conveyed on screen.  Think about for a second, a guy wearing a helmet shows a more believable range of emotions, than the guy who played young Han Solo, or Adam Driver’s pretty one-dimensional Kylo Ren.

Naturally, I’d be remiss if I didn’t mention Baby Yoda, whom like many, I found out about before I even started watching, because the internet exists and nobody knows how to shut the fuck up and not vomit everything out immediately.  When I first laid eyes on baby Yoda, I immediately thought I’d hate it, because I felt like there was the chance that this was going to be a pander-y insertion into the universe like a Jar-Jar Binks or something.  But as the show progressed, they were mindful and didn’t overexpose baby Yoda, and mostly used him only where he was necessary, and tastefully appearing to break levity.  In the end, I found baby Yoda to be adorable and well utilized, and not at all crammed down our throats.

Overall, I maintain that the excellence of The Mandalorian is summed up on account of the notion that the show simply has heart, which is something that can’t really be said about the last decade’s Star Wars films.  Rogue One had a little bit of heart, and I can say that The Force Awakens most certainly did.  But the sequels of the latter sold it to the dark side, and purchased it back at a great cost and completely depleted, and Solo: A Star Wars Story was completely soulless in comparison.

I’m very pleased with The Mandalorian, and I’m excited and optimistic with the news that the show has unsurprisingly been renewed for a second season.  Hopefully the future season(s) will maintain the heart and thoughtfulness of the first season, but as long as Jon Favreau continues to excel as the lord-king producer for nerds and keep the similar cast and showrunners, there shouldn’t be much reason to believe the quality should deviate negatively.