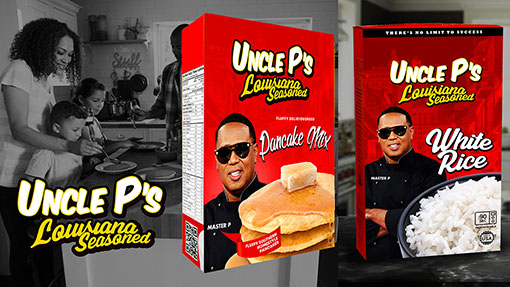 Lately, I’ve been in one of my writer’s ruts.  My janky ring finger that makes it occasionally difficult to type, combined with the fact that now that my brog is back up, I haven’t really found a good rhythm to write, and I’ve kind of lost touch with all the sites I used to hit up to seek out inspiration.  And then there’s that thing called “the baby” which commands the vast majority of all my days, and I sometimes struggle to find things to want to write about, or find the time to carve out in which to do some writing.

It’s times like these, when stories like Uncle P’s Louisiana Seasoned instant food line, kind of help trigger my brain into spurting out words again, and see if I can break some of the rust that’s forming on my writing chops before they go too dormant.

Honestly, my first thought when I read the headline and then saw the hero image was, is this for fucking real??

I haven’t heard Master P’s name since like, 2000 when he showed up on WCW to do a rap vs. country music storyline that ironically ended up with the heel country faction helmed by the late great Curt Hennig inadvertently getting super over, when it was obviously clear that the rap faction was the intended stars.

He also released this shitty song that somehow was always in the top-5 music videos on MTV that I used to watch the countdown after school because I literally didn’t know what else to watch and MTV seemed like it might be cool.  Coincidentally, the lyrics are what I would imagine the average Uncle P’s customer would be doing, while on the crapper after eating too much of Uncle P’s hackneyed instant food products.

I get that in this current climate, day and age, the scrutiny really did fall hard on brands like Aunt Jemima and Uncle Ben’s.  There’s no doubt that both of those brands are rooted in racism and definitely send the wrong message, but they coasted under the radar for eons because they’ve just been around for so long that people just kind of accepted their existence.  But it’s good that they’ve definitely felt the heat of modern judgment, and that they’re definitely on their way out.

But Master P’s timing and intention of releasing his own alternative brand of instant food, just seems kind of tone deaf and a little too obvious an attempt at being a cash grab, using the race card to try and capitalize on current SJW-ing attitudes.

The New Orleans rapper and serial entrepreneur told CNN that he had always assumed brands like Aunt Jemima and Uncle Ben’s were Black-owned. It wasn’t until recently, when some brands began to be phased out for perpetuating harmful racial stereotypes, that he learned about their problematic histories — and decided to do something about it.

The fact that Master P was oblivious to the racist nature of the brands indicates to me that he’s created an alternative brand, with basically no intention of trying to capitalize on anything other than the race card, and not because he has any appreciation for food creation or has some mission statement that everyone can be cooks or some shit.

I mean, just look at the packaging, which has huge-ass silhouettes of himself on it, not even remotely trying to adhere to his own brand’s name by having his “chef’s” tag say “Master P” when the product is called Uncle P goes to show just how out of touch he is, and that he’s not really trying that hard to portray anything other than trying to make a quick buck off of his fellow black community.

The funny thing is that unless his price point is competitive, this endeavor doesn’t stand a fucking chance at succeeding.  He’s basically created a brand that is catering solely to the black community, and unless he can figure out a way to be the choice selection of whitey and other people, he’s dead in the water already.

A part of me hopes I’ll see this shit in stores soon, so I can judge and laugh about it in person.  Whether it was Aunt Jemima, Uncle Ben’s or Uncle P, I never bought any of that shit in the first place, and I sure as shit don’t have any intention of padding some low-fruit effort of a has-been rapper for cheap eats.