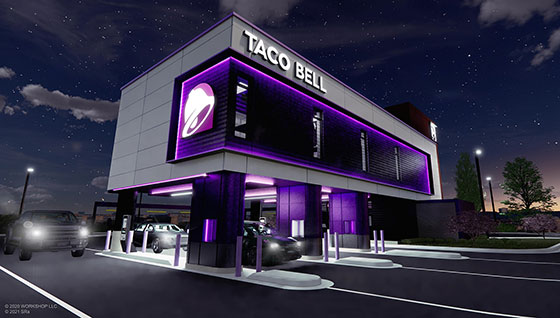 And just like that, we’re one step closer to entering the world of Demolition Man.  The world is already full of pussies, the police are pretty ineffective at their jobs, and although not contained to one singular Simon Phoenix, there are insane sociopaths that run rampant who never seem to be brought to justice.  It only seems fitting that the time has come for Taco Bell to execute a preemptive strike at fulfilling their destiny of surviving the franchise wars, thus making all restaurants in the world, Taco Bell.

I eat way more fast food than I care to admit.  My excuse is that it really can’t be helped, because I’m still very much in daily survival mode with my two kid girls running rampant in my life, and by the time they’re fed, bathed and in bed, it’s already getting late, I’m hangry, and I just want something fast and delicious, regardless of the health detriment fast food is known to be.  All the same, I know what I like, and I would say that I know my way around the players in the franchise wars pretty decently.

I love Bojangles, I think Chick Fil-A’s app is the gold standard, and Zaxby’s is always a good way to break up the monotony.  Freddy’s has entered the market around here, and I hear that a Whataburger has opened up near Kennesaw State University, which isn’t an unreasonable drive if I actually had the time and patience to go there.  Wendy’s and Taco Bell are also welcome options, but with more of a gambler’s mentality, because you just don’t know when one of them will light a stick of dynamite in your digestive system, as satisfyingly delicious they reliably are.  I have no qualms with McDonald’s, and for whatever reason, Burger King doesn’t seem to do to well in the Atlanta market, but I’d consider them if there were one within a reasonable distance.

The thing is, at this current juncture of my life, and well fuck, at any juncture of my life, I tend to favor convenience and ease of getting my food, and hoping it’s accurate, above all else.  I know there are many who don’t like Chick Fil-A because of the original owning family’s religious anti-gay believing, but goddamn is their app good, and their restaurants loaded with hard-working brainwashed teenagers who get shit done fast, well, and like efficient machines.  So I go there above all else, because they’re reliable to get shit fast and consistent.  Bojangles and Wendy’s are like playing craps, because there’s like a 1/3 chance that the drive-thru line will be not be shitty.

But if this two-story Taco Bell in Minnesota goes gangbusters and inspires all Taco Bells around the country to adopt, that would be a game changer in like two seconds.  As efficient as all the Chick Fil-As are, their Achilles is usually the limitations of the sizes of their lots, and there are often times more cars hogging up space there than can be handled, so even if some of them have adopted app-only lines, if cars can’t get to them, they’re not really any better.

It looks like Taco Bell Defy’s saving grace is the fact that the mobile-only lines have independent entrances, and the most intriguing things are the way that the restaurant is literally built above the pickup area, so people are basically getting their food from a teller tube.  It does sound a little outlandish, but you know it has the capability of working miracles, and this is why that a Defy store is being tested in the first place.

What I’m really getting to is the fact that if Taco Bell Defy restaurants start popping up in other places, I have no doubt in my mind that they would rise up in my rankings if they were anywhere convenient.  As much of a luddite I can be sometimes, if there’s one thing about modern technology that I do love, it’s mobile food ordering, and I very much favor those companies that adopt it in well-functioning, logical and efficient manners.

I’m really rooting for this Defy, to defy the odds of surviving in the food industry, to where this can be somewhat of a standard throughout the world.  It would definitely inspire me to go to Taco Bell more, as long as they didn’t liquify my insides with their squirrel meat too frequently.  And then it would force other competitors to start trying to compete and copy, and hopefully we can embark in a world where more fast food joints are two stories and have mobile-priority lines for us gluttons who need our shit quick and efficiently.