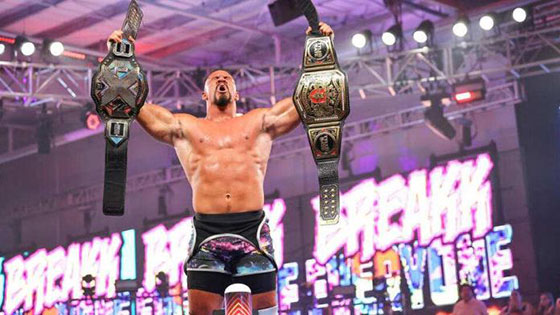 I haven’t watched much wrestling over the last weeks months years, but when I heard about the latest NXT Worlds Collide show, I made a point to carve out an evening to watch it.  After finding out that NXT UK was being folded in preparation for the coming of NXT Europe, I was kind of sad because I actually really grew to like NXT UK in its short lifespan.  Their show really felt grassroots, and the roster size led to quick and exciting stories, and when they started doing their own Takeover events, they were always full of real quality matches, with always at least one broadway on them.

The rise of Jordan Devlin, Walter vs. Dragunov, and Kay Lee Ray vs. Meiko Satomura were some of the best things about NXT UK.  Even their midcard guys like Noam Dar and A-Kid were starting to really shine, and for a while I’d have said that NXT UK was my favorite program within the entire company; granted it didn’t hurt that everything else had moved to cable tv and I didn’t watch it, but still.

Anyway, none of the matches ended in any real surprises; Ricochet wasn’t going to win and take an NXT blet away from the show, same with Nikki ASH and Doudrop.  Pretty Deadly unifying the tag titles was a little surprising, but if the UK scene needed to have anyone thrown a bone to it, it was obviously the tag team championships, because in spite of how much I was hoping Tyler Bate was going to win, it didn’t seem likely that any of the Americans were going to lose the respective men or women’s NXT championships, which is exactly what happened.

But the thing is, Worlds Collide kind of acted as something of a bookend to me as far as all the NXT UK and even the NXT blets are concerned.  Obviously, the UK blets all have to go since the brand is effectively dead now, but it also doesn’t mean that the existing blets in NXT also aren’t on the chopping block either.  Save for some coloration being added to the plates, all of the blet designs were carried over from “old” NXT, and the designs of the blets don’t match the Cosby sweater new logo of 2.0.

Of course when NXT Europe drops in 2023, it’s inevitable that they will get an array of their own titles, that I hope will look great so I can get them, but also hope that they don’t look great, so I won’t be tempted to get them because I haven’t really been chugging out surveys like I used to, so my blet monies have basically evaporated into nothingness now, and I wouldn’t really have the spare cash to get them.

But I also anticipate that NXT 2.0, within the next 12 months, will probably debut some redesigns of all their existing blets, because with the unifying of their UK counterparts, now seems like as good as any of a time for them to drop the old Hunter-era NXT logo’d blets, and debut some brand new, 2.0’d blets.  Especially since the WWEShop really has caught up to every single active blet being available, and they need something to drop to keep blet nerds like me wet.

I guess I should get back on the survey train and start trying to earn back up some more blet money, because I feel like we’re on the cusp of some new shit being available sooner rather than later.