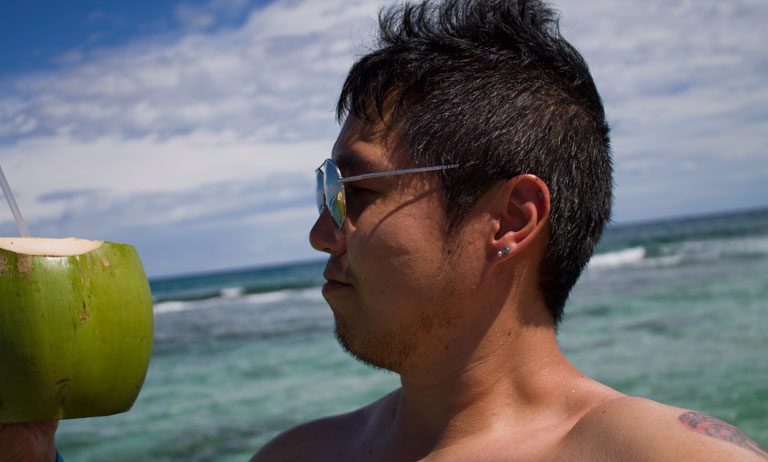 To be perfectly honest, I thought I’d have a lot of things I’d want to write about when I got back from my consecutive vacations.  Perhaps it’s because I’ve been fairly creatively stagnant over the last two weeks, in favor of eating a ton of food, not working, drinking a lot of booze, not working out, and being a lazy vacationer, my brain feels a little mushy, in whatever part that written word comes from.

But as has been the case in the past, if I go too long without at least making an attempt to write, these thoughts and potential words ultimately vanish, and believe me I would prefer that such did not occur.  And as is often preached in any sort of writing workshops or exercises, sometimes simply just writing for the sake of writing can stimulate the brain to where something more substantial is ignited.

I’ve been circulating in my head thoughts of Mexico recently; it was without a question a pretty good trip on many accounts, and I don’t have any regrets about going.  But truthfully, there’s not a whole lot beyond a few concrete thoughts that I’ll ultimately make their own dedicated posts about, to really write about.  The vast majority of my time down in Mexico was spent either in the swimming pool next to my villa, lounging somewhere on the beach, or in a restaurant stuffing my face.  Alcohol was consumed at all of those locations.  Needless to say, as good of a time I had down in Mexico, I really didn’t do that much.

So for all intents and purposes, this post will likely be a lot of drivel.  Writing down blurbs and observations, but probably not going to have a whole lot of general direction.  I actually did jot down a lot of little things in my phone or iPad that I thought might be worth writing about, so we’ll see how this turns out.  Admittedly, my brain feels a little tired, and I can’t for the life of me really fathom how to really turn these little notes into anything substantially interesting to write about.

As a whole, going to Mexico wasn’t the culture shock I thought it could have been.  In a way, it’s kind of humorous how apprehensive I felt prior to going to Mexico, considering how fairly seamless of a trip it was from a cultural standpoint.  Everywhere where I needed to speak to someone in English, it wasn’t ever really a stretch for someone who spoke it to be available.  Considering where I was was the greater Cancun area, it wasn’t a surprise how touristy it ultimately ended up being.

One thing I noticed was that at least where I ended up staying for the entire week, there really weren’t as many Americans as I thought there would be.  There were plenty of white, non-accented English speaking people all over the resort, but as it turned out like 90% of them were Canadian.  Fucking figures, considering the majority of my party was also Canadian, that we all end up in one gigantic Mexican poutine resort.

And then there were boatloads of Europeans and occasional Australians all over the place as well.  The funny thing is that so often is the case from envious Americans who think every culture is better than their own, but to no surprise, when you get a bunch of people together, completely regardless of what their race is, they’re as smart as the dumbest person in the group.  Throughout the trip, I people-watched groups of British people being douchebags, but my favorite was when some brOHs from like Windsor, Ontario decided to raid the pool right in the middle of the shocking treatment, and act like a flock of assholes, oblivious to the fact that their skin was probably going to be bleached in the morning.  And when they approached us, sitting by the poolside, and proclaimed their Canadian nationality, I sat there and just blurt out laughing.  But yeah, not really that many Americans down there that I was remotely aware of.

American money on the other hand, different story.  American money is the grease that keeps the cogs moving in this part of Mexico, clearly.  Everyone seems to exchange whatever they got, for American dollars. It’s kind of incredible to think about in a way too, considering the metaphorical strength of a dollar down there.  Dollar tips are met with such gratitude, and a few bucks here and there drastically improves service at the bar or lounge.

But regardless, it’s infuriating how reluctant Mexican merchants are to part with their dollars, even when it’s to exchange it for other dollars.  More than a few times I felt guilty that I was stiffing people, but I can’t say it’s because I was being malicious or stingy; because more than a few times, I made attempts to break my twenties, or make some tiny purchases to get some smaller bill change, and were met with repeated claims that merchants refused, or “couldn’t make change” for me, despite the fact that practically all the surrounding merchants operated in almost solely American money.

A note to myself for the next time I ever travel to Mexico, bring like 100 singles.  Tips and potential stripper money.

Something that caught my attention while in Mexico was their policia.  When I was riding a shuttle to my resort, which was about 65 miles away from the airport in Cancun, there would be these sporadic checkpoints on the route there; for what, I have no fucking clue, I just remember there being the most brutal speed bumps on the planet, and Mexican police – with big fucking guns.  Seriously, from sub-machine guns, M-16s to one cop holding a SPAS-12, it looked more like Mexican Left 4 Dead than the local police force.

On a completely different topic, I think one of my favorite things about where I stayed in Mexico was the sheer amount of coconuts all over the place.  It’s like there were nary a tree that didn’t have coconuts growing off of them on the resort, and they were just laying all over the place.  Obviously, I don’t get that very often in los Estados Unidos, so excuse me for being so fascinated by them.

But the coconuts, I had to get my hands on just about every single coconut I could find.  Whether I would just pick them up and chuck them into the woods with all my might, or hold one just to feel that I was holding a wild coconut in its indigenous climate, I was simply smitten with them.  I found a coconut in the pool and brought it back to my party, where naturally the very first inclination was to bash that bitch open and see what was inside.

It’s kind of like a Mexican orchard or something, sure it takes a marginal more amount of work to get to the edible stuff, but it’s just all this food growing around in the trees all over the place.  Smashing open a coconut and tasting both the water as well as the nut was still one of the more enlightening things I feel like I’ve done in recent years.

I also pegged the shit out of a raccoon with a coconut, which sure, I know most people would call cruel and despicable.  But in my defense, I’m no fan of raccoons to begin with, and it’s not like the raccoon wasn’t warned at all prior to it, with one warning coconut prior to pelting.  And frankly, I thought it would have been just a bit more spry and dexterous to avoid an easily telegraphed coconut chucking from a drunk American, but clearly these resort raccoons are all lazy and complacent, and have devolved into a sub-species lacking agility, reflexes and the foresight that humans are dangerous motherfuckers.  Worry not, the raccoon was fine, just startled, as it very clearly decided to run by just to troll me that it was okay.  But the little fucker kept trying to creep up and steal my mojito, so it’s not like it didn’t deserve the pelting in the first place.

I felt like Mowgli from The Jungle Book with my aptitude with throwing coconuts.

In a truly fail moment, I attempted to bring two coconuts back to the States with me, but to no real surprise, it was flagged down at customs, and I was denied entry with the coconuts.  Bollocks.  To think I could have attempted to grow my own coconut tree in Georgia.  But the bright side was that it was inadvertently a faster way through customs, as I was shown a door with no wait afterward.

Anyway, for the time being, this’s all I’ve got to really write.  Little tales and observations, but I’m still in the thick of trying to catch up to daily life in the working world, while simultaneously resuming normal activities, and trying to prepare for Halloween.

The photos will take a substantial amount of time, but I foresee myself delving into as many as I can over a few AM hours over one of the next two weekends.  Maybe the writing will flow a little more cohesively when I start writing about specifics.