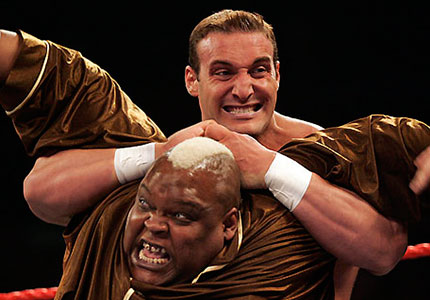 Everything about this story is pretty incredible.  Long story short, former WWE wrestler Chris Masters, rescued his mother from her burning home, set ablaze by a crazy neighbor.  He accomplished this act of heroism by retrieving his mother through a window that he bashed through with a tree.

Let those words soak in for a moment.

Not a stick, or a substantially large piece of wood that happened to be lying in the ground.  Chris Masters picked up an entire tree, and smashed through the window in which he rescued his mother from.  And this wasn’t just some fallen tree that happened to be conveniently located, Chris Masters uprooted a ten-foot tree from the ground with his bare hands and used it as a battering ram.

I wish I were making this up, but it really happened.  Chris Masters’ character in the WWE was that of a strongman who was a mountain of muscles, and used a full nelson to incapacitate opponents.  And because he was so big and muscular, an elementary move like a full nelson had crippling repercussions to those he applied it on.

Needless to say, it’s safe to assume that Masters is probably at like a five on the Marvel Comics trading card strength gauge of seven, with two being of average human strength.  Five is like Venom, or Rogue territory.  Not quite Colossus or Thor territory, but still way the fuck higher than the average human being.  For Christ’s sake, Chris Masters ripped an entire tree out of the ground, just to smash through a pane of glass to rescue his mother.

A pane of glass.

Do you know what else breaks through a pane of glass other than ten-foot trees?  Rocks the size of a racquetball.  A fist with a t-shirt wrapped around it.  Most articles of unworn footwear, if struck correctly and with enough velocity.  Segments of trees, including thick branches, or even a rigid stick, but not the entire tree itself.  The fact that Chris Masters’s brain fired up and thought only the entire tree was going to get the job done is absolutely insane.  Almost as insane as the fact that once decided, he actually succeeded in pulling the entire fucking thing out of the ground, and jabbing it through the window.

I’ve been telling myself this story all day long, and it doesn’t get any less incredible every time.  Adrenaline certainly can lead to some extraordinary performances, but I’m pretty sure that Michael Jordan with the flu couldn’t rip trees out of the ground, let alone use it as a battering ram, and I’m pretty sure I couldn’t get 235 lbs. up on the bench no matter how much adrenaline was coursing through my veins.

I just wish I could have seen something like this happen in real life.  Apparently, Chris Masters was so frightened and exasperated by the lack of immediate action from the police that showed up to the scene of the incident, that it was at this time that he decided to take matters into his own hands.  And ripped a tree out of the ground with his bare hands to use, over all other conventional things.

Don’t get me wrong, I’m extremely happy to know that Chris Masters successfully rescued his mother, and that she’s safe.  That’s wonderful news.  It’s just the circumstances behind it all are just so extraordinary, so unbelievable, that I keep talking about it.  It’s just amazing that a human being had the strength to pull off such an incredible feat.

Now if only there was a way for Masters to parlay this back into a WWE career, it would be so much money.  I can already picture the promos for his return, where he does old-fashioned vignettes, where he could be holding trees in a full nelson position, and as he explains the impending return of the Master Lock challenge, he applies the pressure, and snaps entire trees like twigs.  And then when he gets back into the ring, he can win matches by doing more ridiculously incredible feats of strength, like picking up the entire Spanish announcers’ table, and ramming opponents with it as a finisher.  Or ripping the guard rail off the wall and ramming it into his opponent.

Regardless of it all, it’s a good day for Chris Masters.  He rescued his mother from the jaws of death which is the most important thing of all.  But he did it in such a fashion that makes him look like a legitimate superhero, and he did it right in the faces of all the police and firemen that didn’t help out.  His name is way back in the public eye, which should be a great boost to his career, if he were remotely interested in getting back into professional wrestling.  But most definitely, if he’s not married, he’s probably got a line of women waiting to get a piece of the ‘ol Masterpiece, so they can say they boned a real-life superhero with super strength.