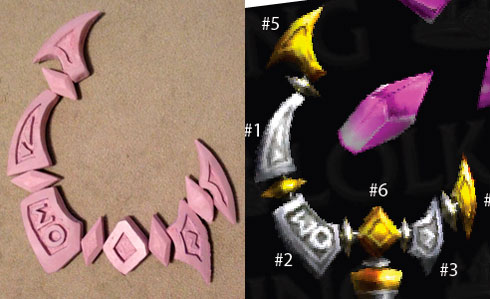 Instead of letting the project sit for a few weeks like I sometimes tend to do, I actually was pretty productive this weekend, and got right to work with the next step of the construction of the LeBlanc staff.

This is what I thought was going to be the hardest part of the entire construction, since I would be essentially slicing the shapes that took a good deal of work in the first place, right in half. Once halved, I inserted a metal hoop rod into the shapes, to put them into arrangement.

In my best efforts to be as thorough as possible in explaining my build, there will be pictures as well as descriptions, after the jump. 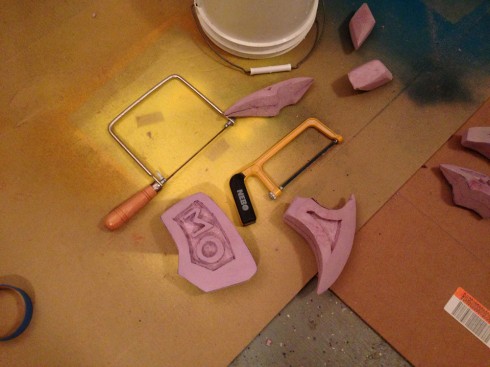 Tools of the trade: mini hacksaws. Seriously, this part of the whole process scared me a lot, due to the fact that one mistake, one slip up, and I have to remake certain components all over again. And the fact that most of the core component shapes had designs bored out in them, meant that there were potentially areas where I could saw through and actually cut into the bored area. Primarily, I used the large-arc hacksaw on the left, since I needed as much height as I could get with some of the pieces.

I found that it also helped to, and sure it was tedious at times, but it led to cleaner cuts, to go in one direction at a time with saw strokes. The back stroke would occasionally catch on knots in the foam, and lead to some jagged cuts, and it’s only when I lost patience did I go with back and forth saw strokes. 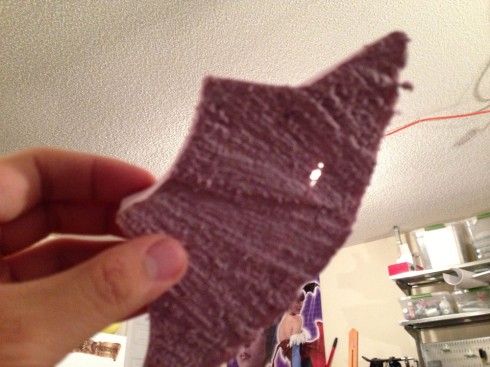 And this is what I had feared was going to happen if I wasn’t careful; or I had an area that was just bored out too far deep. Either way, it wasn’t too terribly bad in the grand spectrum of things, but I was a little aggravated that this even happened at all.

Also notice the jagged cuts in some spots; that’s where I was getting tired and going with the back and forth saw strokes, instead of the single direction.

Here’s just a general idea of what I was trying to accomplish. This is the top piece of the staff halved. 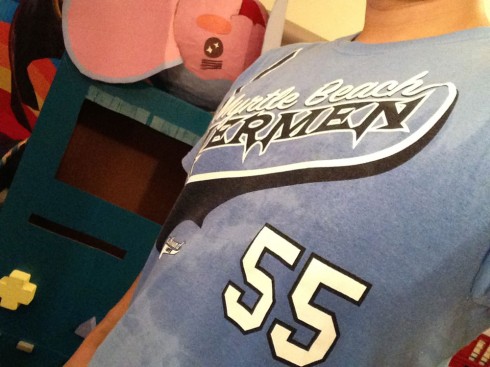 No, I’m not posting this picture of me sweating like a pig to gross anyone out (well); sure, it’s a little warm in my garage, but honestly, the sweats were mostly from how tense I was the whole time while making these cuts. I was all not blinking and super-focused, because I didn’t want to fuck anything up. 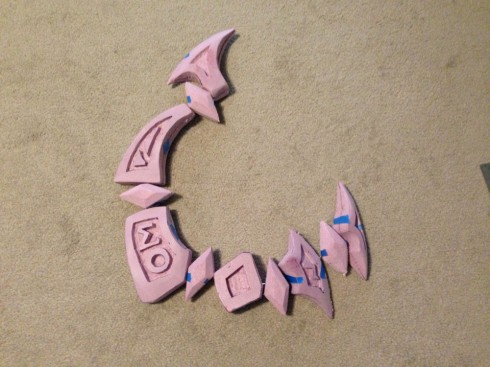 After I made all my cuts; successfully for the most part, thankfully, I loosely taped them back together, so I could remember which pieces corresponded with which. Sure, that makes me sound like a retard for not being able to match the more obvious pieces, but the diamond shapes were all built from the same stencil, and obviously not cut perfectly even, so those were really the concern. Also, just to make sure that they’d be somewhat cohesive again when matched up to their halves. 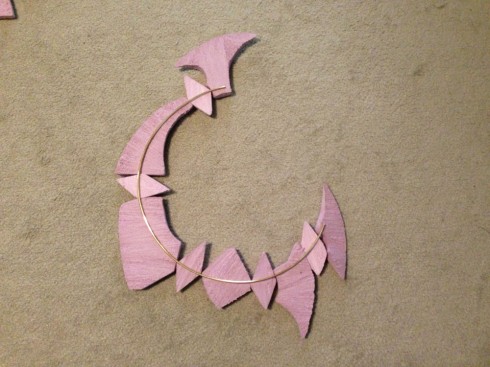 FYI, the gold hoop here was a pretty generic gold hoop that was available at Jo-Ann’s, which cost like $3.

It’s kind of thick, to where I couldn’t use wire cutters, and had to actually use a hacksaw for. 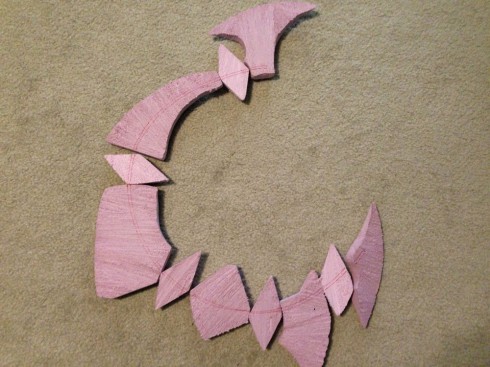 I overlaid the hoop on top of the inner halves of my shapes, and traced the outline of it. From here, I would use an Xacto knife, and slice out a thin, narrow channel for the metal hoop to wedge into. I also used hot glue to reinforce the adhesion, so take into consideration a little bit of space for hot glue to dry into, as the foam itself has a little bit of squish to it, but not as much as you might expect. 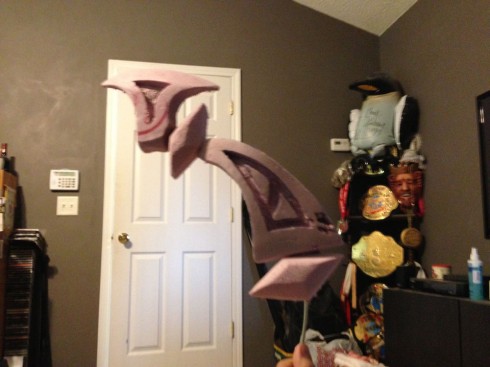 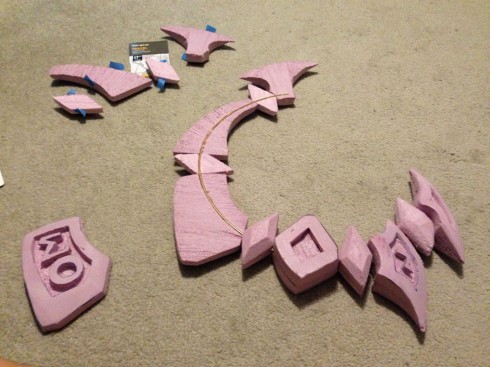 Once I had all the components attached to the rod, it was the reverse process of hot gluing the other halves back together. This is where it’s important to have made good channels deep enough for the rod, otherwise, the rod would create resistance pushing the shapes apart. 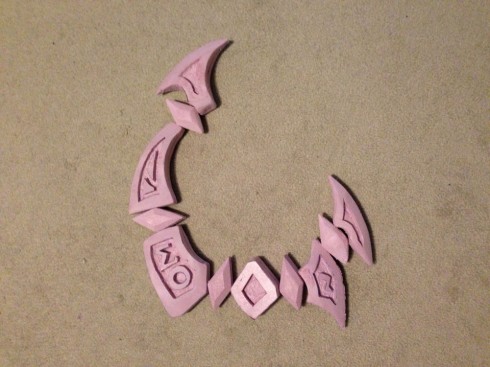 And voila, here we have the assembled top of LeBlanc’s staff.

I’ll admit that I thought this was going to be the hardest part, but I would be completely fucking wrong on that assessment. From her, I’m going to have to figure a way to efficiently Shell Shock (liquid plastic shell coating) this entire thing, and then ever-so-carefully sand and refine it into its final, paintable form. All while taking into consideration how I’m going to actually attach it to the actual staff, where it’s actually sturdy and not too heavy.

Hold on to your butts.