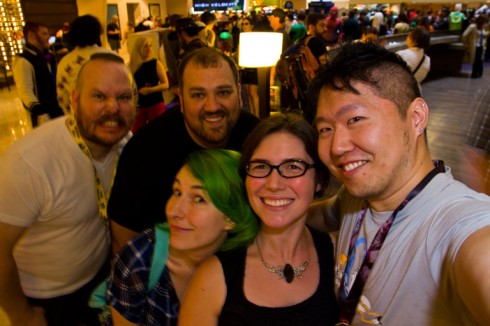 Before I pull the plug on all of the Dragon*Con-related subject matter for the next eleven months or so, I just wanted to write a little something as a finishing touch to all of the content I’ve tried to squeeze out of the annual occurrence.  How about my ability to take the topic of D*C, and turning it into nearly two full weeks worth of content?

As I said in my first post about the convention, this year’s D*C wasn’t the best ever, but it was far from the worst.  I can’t say that I go into any D*C with any grandiose expectations, because that’s really just not my nature; building up too large of expectations, or any at all, seems kind of like a recipe for disappointment, and I’d rather not have any of those, if it could be helped.

That being said, this year wasn’t much different than any of the past few years in the sense of it’s primarily me walking around in circles, looking for people to take pictures of, and taking pictures when I see things I want to take pictures of.  Along the way, there are occasional friendly faces, and we stop and chat, hang out, or spend some time together, before the cycle repeats itself until the sun goes down, and then I drink a lot of beer, and sometimes drink too much.

It sounds a little formulaic sure, and the modus operandi might not change that much, but it’s the people that are the variable in this seeming routine.  And that’s just it, it’s about the people, and has always been.  People are the reason I go to D*C, and drop a grand on a hotel room that’s in the city I live in, just so I can be near and close to where everyone is, where the action is going on.  No guests, no giveaways or anything superfluous has been the reason that I’ve ever gone to a D*C in the first place, and probably never will be.

The post prior to this conclusion was what I said were my favorite pictures that I took.  It wasn’t false, but at the same time, it wasn’t entirely true.  If I weren’t too lazy to go back and change things, and negate the need for this sentence, I’d go back and say it was “favorite costume pictures,” because the reality is that they’re not my favorite pictures outright.

As I stated in my mission objective of the weekend, it’s like every year there are people I see and hang out with, but afterward, there’s little evidence or proof that I was there.  Sure, I know I was there, and sometimes the people I was with remember that we were there, but in the end, I just wanted a little bit of photographic evidence, and a visual memento of these gatherings.

Admittedly, sometimes it feels awkward to ask people to stop what they’re doing and come and take a selfie with me, but in the end, I’m really glad people are so willing to do it.  It’s even more awkward when my own camera refuses to behave and frankly quits at trying to focus and refuses to shutter, which probably made me more reluctant selfie more than I wanted to, but perhaps as I get a better understanding of my own equipment, this will rectify itself in the future.

Anyway, I just want to give thanks to everyone who made the weekend what it was.  Whether it was five minutes or five hours worth of hanging out, eating together, drinking together, simply saying hello and chatting for a brief spell, or simply being the subject of a picture I took.  There’s no point in Dragon*Con without any of you.