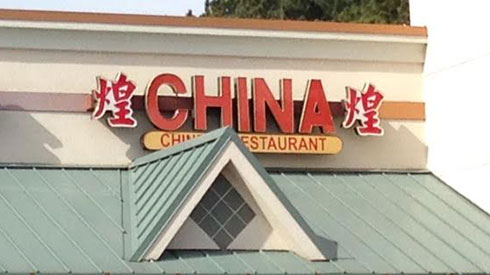 All across the country, Chinese food is about as American as McDonalds.  It doesn’t matter if you’re in Miami, Florida or Eugene, Oregon, beef and broccoli is going to be the same thing as if you got a Big Mac extra value meal in Boston, Mass or Barstow, Cal.

Unlike McDonalds though, despite the fact that every Chinese restaurant pretty much has the exact same menu, they’re never named the same things; unless you’re like Manchu Wok or Panda Express, as they are more literal, in comparison to the McDonalds’ and other fast food franchises of the United States.

I went to a grocery store, and I noticed this restaurant, simply called “CHINA.”  I thought to myself, wow, can’t possibly get more straight to the point than that. Then it occurred to me that simply put, I’d never once, seen a place simply called CHINA before.  And then I’m thinking why not? It’s the most obvious name in the world, to name a Chinese restaurant, but never until now have I ever seen one before.

Instead, businesses delve into superfluous adjectives, pronoun use, or cliched terms that connote with Chinese food.  Some places probably think they’re being creative or groundbreaking, when they’re able to come up with a name that doesn’t actually use the word “China” in it at all.

It’s not like Chinese people have any regard at all when it comes to copyrights or affiliations.  Nor do they seem to care if their desired name is already taken, they can simply open up their own location, slap a Roman numeral on it, and be the alleged sequel.

It makes me wonder how a name like just CHINA managed to slip through the cracks, and evade being seen by detail-oriented people like me for this long.  My first line of thinking is that it’s something so obvious, that no Chinese restauranteur bothered to go with it, because it was assumed to already be taken.  Clearly, it wasn’t.

Nor, should it be any surprise at all, that when checking at least the Metro Atlanta area, it’s not the only one.  Guess it wasn’t that original in the end, but that really shouldn’t be much of a surprise.

*this, and every single italicized name is an actual restaurant somewhere in the Metro Atlanta area
**wrestling logic dictates use of preceding “new” is automatically the kiss of death and condemnation to poor quality