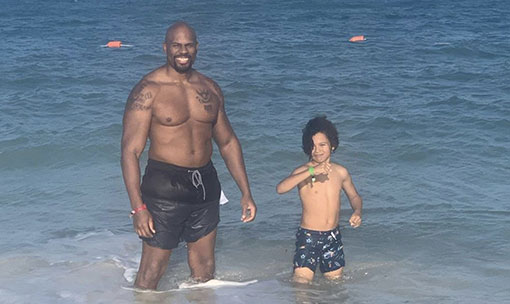 This story breaks my heart.  Shad Gaspard, former WWE performer, has gone missing after being swept out to sea by a rip current in Venice Beach.  The last thing he did was to instruct rescuers to get his 10-year old son first, before a wave crashed down on him and submerged him.  His son was successfully rescued, but at this point Gaspard has been missing for over 24 hours.

I hate writing it out, but after this much time, the outlook does not look positive.  Open water is about as frightening as being lost in the woods, but at least in the woods, it’s entirely possible to remain stationary and hope someone can find out; out in the ocean is like trying to hit a moving target.  We can all hope for the best, until something definitive emerges.

It’s ironic, because while in the WWE, Gaspard was in a criminal tag team called Cryme Tyme, which was even for the standards back then, tasteless and racist, but being the pros that he and JTG were, made it work, and got over with the fans.  They never achieved any notable success, because the team simply wasn’t really given a chance to achieve any success, but they can at least take credit for being entertaining whenever they were on screen.

Eventually, they were bid best wishes on their future endeavors (read: WWE speak for fired), but the two remained active on the independent scene.  One of the more notable stories to emerge post-WWE was when Cryme Tyme actively prevented actual crime time, when in Orlando, Gaspard himself foiled a robbery attempt by beating the shit out of a would-be gunman at a gas station, and detaining him in a chokehold until the police arrived.

But the thing is, in spite of their tasteless WWE personas, Gaspard was anything but the degenerate thug he was portrayed to be and it turns out that he was some pretty heroic father of the year material, ultimately.  My heart breaks hearing this story, and can only wish for miracles for Gaspard’s wife and son.