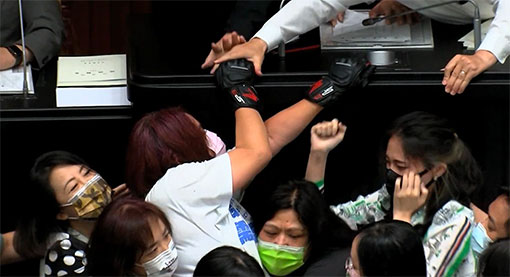 I don’t really have much to say about the situation in Taiwan, or have any inkling of an idea of how coronavirus response has been.  But when my friends showed me this story, the photo alone was most definitely worth a thousand words.

I guess there’s some nationalist party out in Taiwan who is less than satisfied with how the democratic party of the country has been handling the coronavirus, so they felt that their only appropriate course of action at this point, was to start a melee in the courtroom.

Sure, there’s all sorts of pacifist belief that violence doesn’t solve anything, and I could make all sorts of smarmy jokes about the level of civility that exists coming out of Taiwan, but let’s just skip to the part where one woman showed up to the courtroom, equipped in straight up MMA gloves.

Not only did she roll up to the courtroom ready to fight, she wanted optimal protection for her hands, so she could try and deliver haymakers without risking breaking any fingers or knuckles in the process.

It’s almost as if there might be belief that Taiwanese law might be like Final Fight, where defeating the opposing parties in hand-to-hand combat means your party takes over, no questions asked.  And those who show up ready to fight stand a better chance at possibly taking power, than those who didn’t come to work with their own MMA gloves.