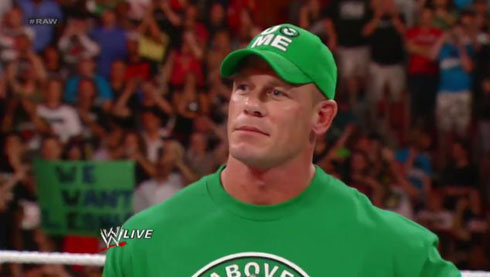 When the fans were chanting for Brock Lesnar fifteen minutes before he was supposed to “shock the world” with his return, I couldn’t help but wonder what was going on in John Cena’s head, since he was the guy in the ring trying to cut a promo, but being drowned out by the Lesnar chants.  Also, I couldn’t help but wonder what was going on in the minds of WWE upper management and Vince McMahon at what was transpiring before their very eyes and ears – every single person in an arena, completely already in the know of what was probably carefully prepared, scripted and planned to be a big surprise.  I wonder if someone got fired as a result, or even more meta, this was all perhaps an even bigger elaborate ruse!  But I kind of doubt it.

When LORD TENSAI emerged to silence with an elaborate ring entrance, complete with a Japanese Virgil, the fans were in silence, awaiting for the moment when this “new” wrestler would remove his veil and reveal his face to the crowd.  And then there was a gigantic groan of a sound from the collective audience at the familiarity behind the man, whom no amounts of new tattoos and Japanese scripture written on his face could hide.  Within seconds the “AL-BERT” chants began drowning out the arena, and without question, had he not prepared for the re-debut with a new razor, I’m sure the “shave your back” chants would have erupted too.

In both these instances, the internet had a large part in; Lesnar’s return being widely revealed before the debut.  And if someone didn’t know who Prince Albert was when he was still Prince Albert, look no further than to the very Twitter that WWE is fervently pushing so rabidly, to have revealed/reminded to all wrestling fans, old and new, that Lord Tensai = AL-BERT – trending worldwide, of course.

A long time ago, I used to frequent this one particular wrestling website.  I was often interested in reading the spoilers of future television shows, and I grew fascinated by backstage happenings, and the insider-like knowledge of who’s grumbling, who’s mumbling, and which wrestlers were popular amongst their peers, and which ones weren’t.  But something happened; the more I visited the site, the less I began to enjoy the actual product anymore.  It took me a while to realize it, but it got to a point where I began to feel like I knew too much of backstage happenings, and it became more logical to why things were happening, and why some things weren’t.  Reading columns from jaded and snarky internet “columnists” didn’t help the cause much either, in helping shape my opinions.

When I realized what the root of the problem was, I stopped going to that website.  Not to mention that the site had become overrun with malware and spyware issues.  But I stopped visiting the website and reading about wrestling, and for a little while, I stopped watching wrestling so fervently too.  It didn’t help that there was a huge oversaturation of product at the time with three WWF shows and two WCW shows a week, with two pay-per-views a month, three, when ECW was still around.

A little while later, I began tuning in again, and before I knew it, I found myself enjoying wrestling again.  I was older, wiser, and still had a lot of residual knowledge of how the wrestling industry works, from a smarky-point of view, not to mention a wealth of wrestling autobiographies that I had read through the years.  But it’s kind of where I’m at as a wrestling fan today; fairly casual and appreciative of the product.  Understanding of how things kind of work, but not allowing it to ruin the experience as a whole.

I often feel admiration for the wrestling industry, or rather the WWE, for being a great example of an entity that understands the importance of adaptation to survive.  I’ve lived through and witnessed many iterations of the WWE in my lifetime, and whether I agree, like or dislike what they do, I’m aware they’re often doing it, because they’re moving with the times.

But the current generation of WWE programming is so enamored with Twitter, because Twitter is one of the biggest things on the planet these days, and to someone like me, it’s kind of obnoxious.  Sure, I make jokes about it, like how wrestlers without Twitter accounts don’t get their names put up on screen (despite Great Khali debunking that), and how it’s kind of fun to try and game the system, like instructing my friends to tweet about the makeup smudge on Maria Menuounous’s white pant ass as hashmark-skidmarks on the Wrestlemania thread, but if the Twitter presence in WWE were to overnight vanish, I simply wouldn’t give a fuck, and probably be relieved.

Now I can’t say it’s the worst thing in the world, because I have to give credit to the Twitter association for turning Daniel Bryan and YESMANIA into the mega-star he is now, but for the most part, I can’t really see a lot of long-lasting great things to come out of it.  We live in a troll-filled society as it is these days, and more often than not, the sarcastically unpleasant will beat out the good things that come from the every-persons.  For every Daniel Bryan success story that might grow from Twitter, there’s going to be spoiled storylines, events and occasions that will essentially be ruined by overzealous and/or asshole fans being overzealous and/or assholes.

I imagine John Cena, and Brock Lesnar were disappointed about the preemptive reveal.  Comfort wasn’t exactly on Cena’s face when he was scanning the crowd while they chanted for Lesnar.  And as for Albert Lord Tensai, he really hasn’t improved much as far as my evaluation is concerned, but because of his well-known past, he’s already been discounted and not been given a chance; and frankly, in a business where performers live and die by the crowd’s support, it’s kind of not fair to him.