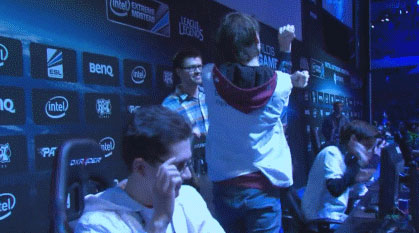 When Kobe Bryant dunks a basketball or hits a three-pointer, typically it involves having succeeded in the face of a fervent defender, who’s trying to use body positioning, superior footwork, or simply sheer physical strength to prevent it from happening.

When Tom Brady throws a touchdown pass, typically it involves locating an eligible receiver within the span of five or fewer seconds while there are anywhere from five to six 270 lbs+ linebackers and tackles who want nothing more than to sit on him, and he actually has to succeed in throwing the ball in a place to where the receiver can catch it.

When Miguel Cabrera smacks a base hit, typically it involves hitting a little white ball that’s 2 7/8” in diameter, traveling at him anywhere from 79-94 miles per hour, and is sometimes coming at odd angles or irregular curving motions.  He has to put the bat in a position to where not only will it make contact, but send it into a patch of field where an opposing fielder cannot catch or corral it.

The above gif is a guy whose team just won a game of League of Legends at a major “professional” tournament.  I have no idea if this was the final or not, but let’s say this is the championship game; his team has now just won a fairly substantial cash prize.  That’s great for him and his team.  But his conduct post-match for winning a video game is a little bit excessive, and way immature; but what else can you expect coming from a “professional gamer,” whose median age is somewhere around 21, and maturity is around 13?

It doesn’t really matter if it’s League of Legends or Street Fighter, but the fact of the matter is that professional gamers are still people playing video games.  The same argument could also apply to professional sports, in which it’s grown men playing kids’ games, but there’s still the athletic aspect about it that makes it so much more.  Now I enjoy watching very talented gamers play their best games, but let’s not treat them as if they were remotely in any league as a professional athlete.

Furthermore, kids playing sports with aspirations of being something professional in their adult lives, the whole way they’re (attempted to be) taught sportsmanship and the importance of understanding winning and losing.  I play my share of LoL to know that the vast majority of League players are a bunch of insufferable retards with absolutely little social interaction skills, and win or lose, they behave in a toxic manner that makes me lose faith in humanity a little bit.  The gif above, I should remind you, is a guy who won.  Winners shouldn’t be cussing out and throwing rude gestures to the losers; not saying it’s acceptable for the losers to do the same, but losing sucks, and losing sometimes brings out poor sportsmanship.

There’s nothing worse than a sore winner, and when it comes watching people playing video games, you’ll see a lot more sore winners than you would in professional sport.  It’s hard to avoid because most professional gamers are still immature kids at heart and mind regardless of their age, and it’s pretty much the chief reason why I’d never be able to take professional gaming seriously.