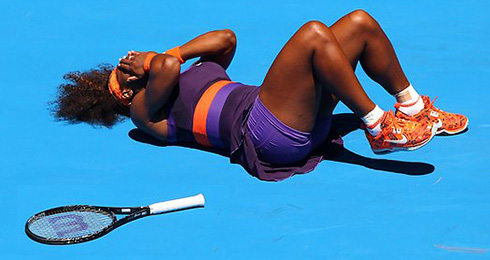 Occasionally, I like to watch tennis.  I think it’s an often underrated sport because it’s not as popular as football or basketball, but on any given day, I’ll easily argue that it’s the most physically demanding sport on the planet.  Watching tennis while I’m running on the treadmill sometimes makes me feel like running in place is nothing, in comparison to what these guys are doing, running back and forth and swinging a racket while trying to place the ball in precise spots at speeds of over 100 mph.  So whenever there’s a televised Grand Slam event going on, I always find it convenient when it happens to be airing while I’m at the gym.

Today, while Andy Murray was having a match with some guy from Russia, I noticed on the ticker that Serena Williams had been defeated.  That in itself is always newsworthy, because Serena Williams is pretty much the best female tennis player in the game right now, and she doesn’t lose often.  Apparently, she had won like 34 matches in a row prior to this defeat, so it’s safe to say that this was most certainly a monumental upset.  But then something appeared at the corner of the screen, saying SERENA WILLIAMS PRESS CONFERENCE AT 11AM.  I looked at the clock and it was 10:56am.  I’m thinking, “what about this match I’m watching now?”  And the answer came at 11am, when the match stopped airing, and I was suddenly subject to seeing a distraught looking Serena Williams sitting at a press meeting.

It was at this moment, I turned off the television.

Serena Williams has got to be the worst loser in sports right now.  It’s almost worth it to root for her and have her just dominate women’s tennis and win every Grand Slam, just so nobody has to see what happens whenever she loses, because whenever she does, it’s the same song and dance and it just makes people dislike her more each time.

Tennis is often seen as a very sophisticated sport, the “gentleman’s sport,” as it’s so often referred as.  Throughout history, we’ve seen lots of outstanding human beings to play the game, and whether they won or not wasn’t always as important as much as they were always just seen as genuinely good people.

Andy Roddick is a guy that was always highly ranked, but more impressive to me was the stories of how down to earth the guy was, and the story of how he was like in France or something, and a fire broke out in his hotel.  But instead of retreating and saving himself, he hung back to assist in evacuating the building for children and the elderly – on the night before he had to play at the French Open.  He could never get past Roger Federer for many Grand Slams, but he retired being known as one of the best, most gracious and true gentlemen in the sport.

Speaking of Roger Federer, he could arguably be the greatest men’s tennis player of all time, but it’s not so much how he handled victory as much he handled defeat.  When it got to the point where Rafael Nadal surpassed him, Feds always bowed in defeat with grace and humility.  He never tried to upstage Nadal, and only heaped praise on his opponent when asked about it, and then he bought all the ball boys and girls pizza in appreciation for all their hard work.

Serena Williams is like the opposite of all of this behavior.  Whenever she loses, it’s never in a gracious manner.  It’s always how the opponent didn’t really beat her as much as she beat herself.  She never gives any credit to her opponent for bettering her and always claims it is her fault for the loss, or even in a few instances, that it was claims that a line judge was biased, or the official for the match was out to get her.  She’s a miserable loser that shows the worst of humanity in defeat, once even getting all racist on a Japanese line judge, going as far as to have allegedly made some physical threats.

Today’s press conference was a prime example of how she can’t handle losing.  She lost the fucking match, so what does she do?  Makes sure to usurp all the attention of the sport to hold some press conference, where she probably claimed that she beat herself and the same rhetoric about how she made mistakes and that she will be back in the next tournament.  And because she’s actually a good tennis player, she gets the attention, even taking the focus away from active matches, between those still trying to win Wimbledon.

But in a way, I guess she should be pissed.  Serena Williams should be winning every match, because she’s a physical freak of nature.  She’s like Chyna in the WWE Divas division.  She’s like the tank in Left 4 Dead in comparison to the other common special infected.  She’s the size of a huge muscular monster while all the other women are spry athletic sprinters.  She physically outclasses every woman in the world pretty much, so she really should be winning every match.

Even still though, it’s not like it’s ever too late to turn a new leaf and show some grace.  It’s not like Serena has that many more years left in the tank, considering she’s been playing at the professional level since she was like 17 or something, and she’s 30-something now.  And it’s not like she’s got anything left to prove, because she’s won at least one of all the Grand Slams, as well as Olympic gold.  But because she simply refuses to do such, there will be people like me that continue to dislike her, and root against her, even if the flag next to her name says USA on it, because it’s sometimes more of an embarrassment that people like her represent the United States, especially when she sporadically loses.

When the day is over, wins and losses don’t matter in your legacy; people will always remember tennis players for their behavior off the court, and I can’t think that there’s ever anything wrong with being considered a gracious human being.