Despite how harmonious everything ultimately ended up during the wedding weekend, the reality is that I had three pretty defined groups, representing for lack of a better term, my side of the guest list.  Family, my friends, and then my groomsmen.  This isn’t to say that my groomsmen are not my friends, frankly as far as I’m concerned, they’re just a little bit more, and more like additional family than they are just friends.  However, that being said, it was with my two groups of friends in which I had two particular photos that I wanted to take during the reception.

I’m fortunate that I was able to make them occur, and they were among the photographs that I was looking forward to seeing the most after the wedding.  The significance of these particularly desired shots was simply the fact that among all the players involved in these shots, I had reached the point where I had known all of them for (nearly) twenty years; two-zero. 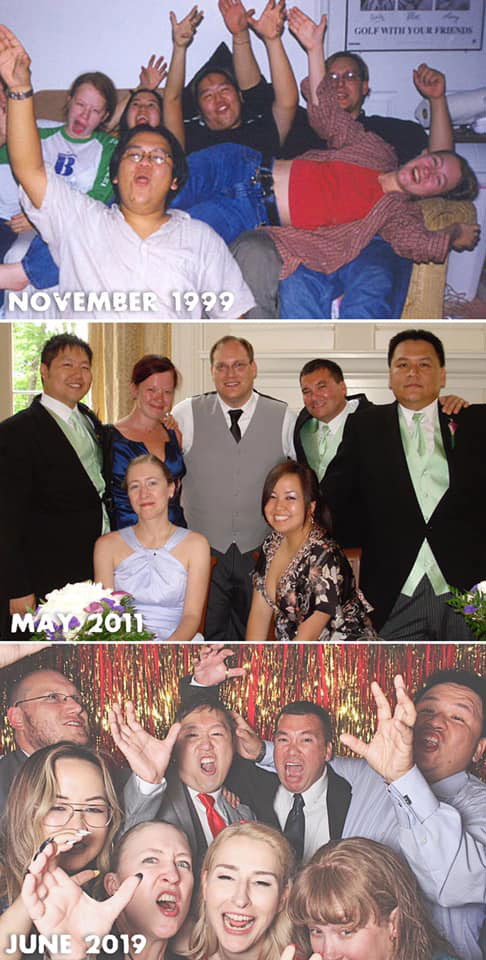 I’m doubtful that I am I going to ever really be the guy on social media with thousands of followers and a number next to “friends” that is anything over like 200.  I’m far too guarded, paranoid and too much of a shut-in to just willy-nilly friend every single person in site, not to say that those who do are any lesser than I am; it’s just not me.

But the people in my life that I do call friends, these are typically the people that I will do so, for a span of time that’s more accurately compared to severe jail sentences than quick and meaningless short relationships.  Friendships with me are always more likely to be long-haul endeavors than just relationships out of conveniences, which isn’t to say that I’ve had my fair share of those, not that there’s anything wrong with those either.

The point is, the wedding was a ceremony of my wife and I coming together in official matrimony, but the reception wasn’t just a celebration of just that joyous occasion, but it was also a celebration of a whole bunch of friends coming together and reuniting and celebrating nearly 20 full years of relationships.  I mean seriously, how many people can say they have a bunch of real, genuine friendships that have lasted for 20 years?

This isn’t something that I take for granted, I most definitely feel lucky as hell that I’ve been fortunate to know so many good people in my lives that have been willing to stay, as much as I’ve wanted to keep them in my own life.

But back to the photos, because I’m such a superior record keeper and historian, I dug up photos from 20+ years ago from two separate groups, with the full intent of doing the then vs. now photographs, because there’s fewer things that I enjoy than time lapse photograph comparisons.

The best part to me is that the twenty-year club will only get larger from here as a little more time passes, and before we know it, I hope one day, I’ll be brogging about the arrival of the Thirty-Year Club.  And I certainly hope that close to the same number will still be around in my life then, as they have been over the last twenty.