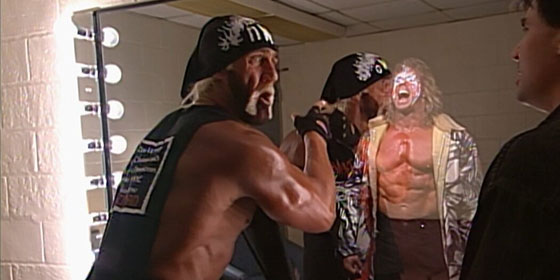 One of my friends in a group chat turned me onto this keen observation, and I found that I liked it so much, I believe it’s worth integrating into my general lexicon, to casually drop into conversation and low-key hope to have the opportunity to mansplain it to anyone who risks questioning what I mean by it when I use it.

In 2001, Vince McMahon bought the crumbling remains of World Championship Wrestling for an estimated $4.2 million dollars; a tremendously far cry of a bargain, considering the company was about $30 million in the green just two years prior.  Fairly recently, in spite of my own general ambivalence towards the subject, there’s been a lot of hullabaloo over a WWE scandal in which it was revealed and continues to unearth, that Vince McMahon has shelled out over $20 million dollars over the years in hush money to hide his and his inner circle’s general sexual deviancy.

Frankly, it’s no shock or surprise that it turns out that Vince McMahon and his cronies did any of the things they’re being accused for at a rapid pace these days, because they’re rich, they’re white, they’re old money, and they’re in an industry where there are literal Playboy-caliber women that come and go.  As much as I respect Vince McMahon’s business acumen, I’m not the least bit surprised that he’s an asshole who wields his money and power for sex, because an endless parade of men in similar circumstances have been doing the same for eons now.  But when the day is over, there’s a whole lot of murky water in the sense that the money was accepted by their recipients, and in my legally uneducated opinion, I have to ask, what crimes actually occurred?

Regardless, the silver lining to it all is that the HeAT has forced Vince McMahon into the retirement that wrestling fans have been calling for, for years now, to actually occur, and in the aftermath of it, same with all of his cronies and stooges who were all implied to be complicit to his bad behavior, if they weren’t accomplices to begin with.  And with it, ushers in a new era of WWE, helmed by his more progressive daughter Stephanie McMahon and with her, Triple H is back into the fold, creating optimism and hope, considering his popularly lauded work with NXT over the last decade.

Obviously, most wrestling fans know that we’ve not seen the last of Vince McMahon, but as long as this scandal is continuing to unfold, we know there’s plenty of time for the company to move and evolve without him so frequently aboard the main cabin.

But anyway, back to the point of this post, the takeaway of it all is that the analogy was made that to date, Vince McMahon has paid out the valuation of 4.7 WCWs, in hush money for his sexual indiscretions.  WCW has become a noun, which is definable as an analogy for approximately $4.2 million dollars, and is applicable as metric in dannyhong speak moving forward.

Yep, metric checks out. Once the greatest threat to the WWE, now a unit of measurement to ironically measure stupid amounts of money to something more humorously.