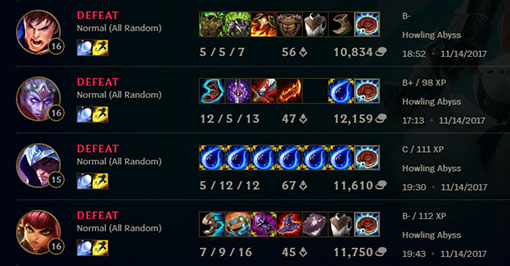 Ever since Rito rolled out the League of Legends update signifying the end of season 7 and into the preseason of season 8, things have been a little bit interesting in my gaming observations.  Among the very numerous things that have been changed up, I would have to say that one of the more notable actions was the removal of the level cap, which for the previous eight years had been level 30.

Honestly, I’m not entirely sure why Riot decided to do such, but I suspect that it has something to do with the fact that once 30, many players go off and create alternate (smurf) accounts, so they can either have multiple accounts to play from with ulterior motives, or if they’re actually really good players, climb the ranking ladder with multiple accounts and/or then try to sell them for actual currency.  Either way, they end up diluting the player pool with multiple accounts, and I feel like by removing the level cap, it incentivizes continuous play on one main account, since there’s no more limit to how much the account can level up to.

However, one of the (I feel is like an) unintended result of removing of the level cap is that there’s a mad rush of players suddenly looking for the quickest way to level their accounts beyond 30, so they can have some bragging rights or try and look better than they actually are, by getting their accounts higher than everyone else.  Effectively, when Riot removed the level cap, level 30 became the new level 1 all over again.

Back to the point though, you know what the quickest means of farming XP seems to be now?  ARAM.  The wacky all-random-all-mid variant of the game that was birthed in the bowels of custom games, but developed such a cult following that Riot had no choice but to make it a permanent game mode, privy to such benefits like XP, IP and champion mastery.

In the first days of preseason it wasn’t a big deal, since everyone’s still in a state of testing out the new runes system to customize their gameplay but once that dust settled, people just now want to farm XP to level their accounts.  People have complained that the imbalance brought forward by a massive amount of radical changes in the game have turned Summoner’s Rift games into these unenjoyable games where one team snowballs like crazy, and games end before Baron can even spawn.

So if games are ending faster than the average ARAM games of old, where are the tryhard XP farmers going now?  To the ARAM of new, where the same problems on SR are exacerbated on the Howling Abyss, and matches are often over by 15 minutes if one gets the right mixture of savvy players on comfort champions with a good recipe of runes.

The thing is, ARAM is widely perceived as a joke mode of the game, since it’s not the standard, strategic, team-driven 5v5 mode on Summoner’s Rift in which all forms of professional League of Legends is played otherwise.  Those who don’t like ARAM look at ARAM with noses held high up in the air, touting that it’s “not really League of Legends” and other derogatory rhetoric and blanket statements about the mode as a whole.  Dedicated ARAMmers like myself are used to it and mostly tune it out, but it’s not lost on us the amount of disrespect the mode as a whole gets, as well as all who play it.

But now, ARAM is the tits of the town, because of its inadvertent means of generating XP at a rate faster than all other modes.  And as a result, I’ve been getting queued up with fucktons of ARAM tourists who are probably Summoner’s Rift tryhards who are probably used to playing just a handful of champions in a very meta-defined role, that have absolutely no wherewithal to playing in the chaos and fast-paced environment of ARAM.

So I’ve been losing a whole lot of games lately, because like 70% of the time, I’m on the team that gets the composition from the bottom of the toilet, with the players that can’t handle ARAM, while the other team ends up being a composition from hell with two ranged ADCs, Xerath and some CC tanks like Maokai and/or Amumu.

I’m also losing a whole lot of games quickly, because when the circumstances are right (poor), games will be over in about 15 minutes, when it becomes very apparent that there are some severe imbalances in both the new rune system with particular champions, as well as from the hordes of ARAM tourists who absolutely suck monkey balls as ARAM, regardless of what their rank or champion mastery is outside of it.  Oddly, I’ve had a few games go way longer than a standard ARAM, because conservative players build tanky, and some of these particular games have turned into these 36-minute tank slugfests, where everyone has 4,000 hp, but can’t really do any damage, but the vast majority of the games are usually over pretty quickly.

So, there’s a tremendous amount of irony in League of Legends right now, with people all over crowding into ARAM queues these days, with hopes of grinding out levels so that they can be ahead of the curve amongst their peers and fellow players.  But in doing so, they’re diluting the pool of dedicated niche players with their inflexible and meta-driven playstyle, used to going for set plays every three minutes, when perfectly executed plays done previously have forced the opponent to burn flashes and heals, and they know they’re vulnerable, but having zero clue on what to do when a snowball hits them from 7000 units away.

Sure, I don’t play a lot of Summoner’s Rift anymore, and I understand that it’ll take a lot of play and practice for me to get back into the swing of such a competitive mode.  But ARAM is my arena, and has been for the better part of the last four years, and I’ve taken flack and put up with the criticisms about how I’m not really playing the game the way it’s supposed to be played.  But with the removal of the level cap and the tryhard-y nature of gamers, they’re all diving into my pool because it suits their overachieving motives, but stinking it up for all others who enjoy the mode as the norm.

As is often the case, gg Rito; way to have good intentions but fucking it all up in some way shape or form.

Get the fuck out of my ring, tourists