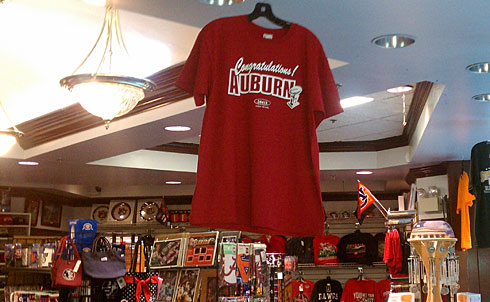 Living where I do, it is neigh impossible to avoid the phenomenon that is college football.  Namely Southeastern Conference (SEC) football, the most blindly passionate, dedicated, and die-hard subdivision of college football in the country, with fanbases twice as aforementioned, with a heaping addition of completely retarded to finish the ensemble.  And Atlanta is literally the crossroads of ALL SEC schools, as it’s the center point for Georgia, South Carolina, Florida, Tennessee, LSU, Ole Miss, Auburn, Kentucky, and of course, my favorites, the Alabama Crimson Tide last but not and least.  Whose name describes a big wave of water, but mascot is an elephant, and all their supports always say “Roll. Tide” as a school saying?  … yeah

SEC fans are borderline mentally crippled when it pertains to the fortunes of their respective football teams.  Hazing, harassment, and light graffiti are some things seen in college rivalries, but the destruction of property, flagrant vandalism, kidnapping of animal mascots, burnings, violence, extinguishing of life, and sheer unadulterated hate is more the MO of SEC fans.  Lets not get into the legions of horribly designed novelty t-shirts, made to incite allegiance, talk smack, and celebrate results of individual games.  Recently, distraught over the anguish brought on by ultimate rival Auburn, winning the National Championship or beating Alabama at some point, an Alabama supporter (he didn’t actually attend) marched onto Auburn territory and poisoned the shit out of two iconic giant oak trees that were well over a hundred years old at a popular Auburn hangout spot.  … yeah, because that’s justified retribution for the school you don’t like having some success.

But anyway, I’m deviating from the point here, but the idea has been touched on that Alabama does not like Auburn, and vice versa, and it’s no secret that out of all SEC schools, I think Alabama has the biggest nutjobs and wacked out mental supporters.  But the picture above is a t-shirt I saw at a crappy mall – it’s a “memorabilia” shirt, boasting University of Auburn, National Football Champions.  Okay . . . what’s the point?

This particular shirt is in nothing but crimson.

Crimson is the color of the University of Alabama.

Clearly this shirt was made by an Alabama supporter who thought it would so insultingly awesome to make a congraturatory Auburn National Champions shirt in, wait for it … kekeke … CRIMSON!