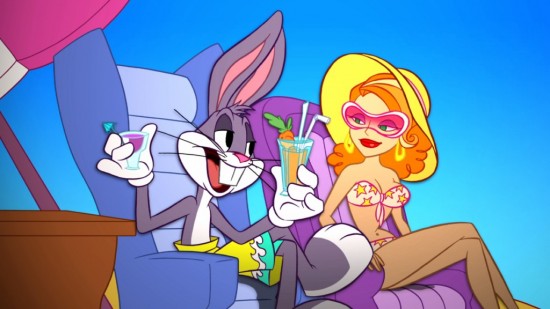 A long time ago, I used to really like Looney Toons. When my family first acquired cable when I was in the third grade, Looney Toons was almost literally, always on television. The TNT network was still very raw in those days, and they compensated for their lack of programming by having gigantic blocks of Looney Toons at almost all hours of the day. Before I left the house to go to the bus stop, I could watch some Bugs Bunny. The time in between returning from school and being forced to go piano lessons or Tae Kwon Do, there was more Looney Toons. In the evening, or on those nights where I couldn’t sleep, all I had to do was turn it to channel 100, and sure as shit, there would be some Looney Toons. Needless to say, I really liked Looney Toons.

Recently, I discovered that Cartoon Network has essentially created a new Looney Toons, and is currently in circulation. I won’t attest to making a conscious effort to check out this new show, as my television activities are pretty limited to baseball, wrestling, and sometimes Top Gear, but I did catch a few episodes in recent weeks.

Professional wrestling has taught me that adding “New” to anything is pretty much condemning it to suck. That being said, Cartoon Network’s New Looney Toons fucking sucks.

The animation quality is definitely refreshing, as evolved with the times to look clean and crisp, since the days of physical drawing and animating have since moved to the digital age, and it’s a little odd at first to see iconic characters looking so sharp and clean on television now. Not that I’ve bothered to check, but being somewhat of a former employee myself, I’m guessing the animation itself is outsourced to Korea or somewhere else outside of the United States, like many of their programming, original or acquired.

The writing sucks. The plots of the shorts are all convoluted and stupid, and don’t really feel like they’ve evolved from olden times, with the exception of that a lot of the references are more in tune with today’s stuff, which most jaded people of today feel that today’s stuff more or less sucks. It’s almost as if the show hasn’t really evolved aside from a visual standpoint, but is just trying to keep in time with the modern days.

But my biggest objection is the recreation of Bugs Bunny. The penultimate main character of the entire fucking series has essentially been turned into a god damn douchebag.

Original Bugs was always a combination along the lines of 25% insane, 25% cocky, 25% righteous, 25% funny. There were episodes where he fought ‘evil Orientals’ in a political statement of an episode, episodes where he played an entire baseball game, one bunny versus about a hundred brutes, and my personal favorite, where Bugs went apeshit when he found out that the bounty for ducks was higher than rabbits, and went on a destructive bender all over the United States, culminating with him sawing off the entire state of Florida, before he was apprehended for a gigantic reward. Classic shit.

But new, douchebag Bugs, is more like 40% selfish, 20% obnoxious, 20% horndog, 20% arrogant. I don’t necessarily know what this says about society today that he’s been molded into such an abomination, but all I know is that I don’t like it. There’s no sense of humility, and he goes about every episode parading around the unfortunate truth that he’s better than Daffy Duck, but the difference is that he’s aware of it, and passive-aggressively throws it in his face at every opportunity. I’m finding myself futilely rooting for Daffy Duck in all the episodes, despite the fact that everyone knows he’s never going to get the best of Bugs, but it doesn’t matter, because the way Bugs Bunny has been recreated, I really don’t want to root for him.

One thing that caught my attention was the slight, sexification of the show. I mean, all cartoons back in the day had some veiled remarks and innuendos intended to blow over the heads of children, and to the amusement of those older, but the new Looney Tunes doesn’t seem to have a problem with a reoccurring buxom redhead character, that acts as the love interest to Bugs and Daffy, and maybe some others too, if I cared to watch any further. I know we live in a much more sexually accepting society where you hear stories of kids as young as sixth graders getting caught giving and receiving blowjobs in the back of the school bus or class room. But shit, to plague shit like Looney Toons is just a little bit saddening to me.